Symbol of the Vindicare Temple 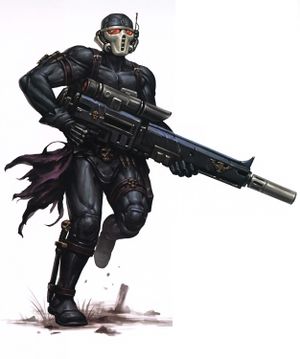 The Vindicare Temple is one of the temples of the Officio Assassinorum.[1] Their specialty is the deployment of elite snipers.

The Vindicare Temple teaches the assassin the art of patience and the perfection of marksmanship. These stoic assassins are conditioned by their temple to be unflinchingly loyal to the Imperium, often being trained to limit their vocabulary only to words that are useful for their profession, cutting off all emotional attachments to other humans so that they will never hesitate to eliminate any target.[2][3] The intense training of a Vindicare Assassin enables them to pick out a single target even amongst roving hordes of enemies on the battlefield.[1]

In one celebrated (but carefully concealed) engagement, a massed Eldar assault in the Lammas Campaign was halted by a lone Vindicator Assassin hiding in a ruined tower. The Eldar advance in the face of this tower was stalled again and again by a hail of deadly sniper fire which slew Exarchs, Warlocks, and Support Weapons crews in quick succession. Eventually, the Eldar called in their scouts to clear the tower[4], but when they entered it they found it full of grenade traps ready to meet them.[5]

The Exitus Rifle of a Vindicare Assassin is his primary weapon, and is chambered to fire a variety of specialised ammunition types, therefore he is equipped to take out targets ranging from well-shielded individuals to monstrous beasts or vehicles.[1] He is also issued with an Exitus Pistol, which fires a shot more powerful than most personal firearms used in the Imperium, providing him with a valuable short-ranged weapon for situations where a sniper's rifle would not do.[1]

Vindicare Assassins wear a Spy Mask, which is able to scan on a wide spectrum to pick out heat and energy sources over long distances. The mask also allows the Assassin to monitor the enemy's communication channels, and comes equipped with concentrated food and water cartridges for extended operations. They also wear a specially designed Stealth Suit, which combines normal synskin with chameleon chemicals to hide their forms in their surroundings.[1]