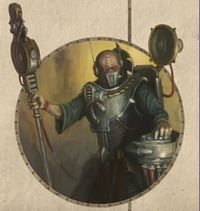 A Clamavus is a type of Genestealer Hybrid that broadcasts the emancipatory creed of the Cult far and wide.

To their fellow Cult members, the Clamavus is the spreader of truth. They are seen as heroes who broadcast the cult's creed far and wide, letting the common folk know that the hour is coming when they shall be freed from bondage. To their foes, Clamavuses are information assassins spreading vile propaganda. Each of these guerrilla comm-hackers is a Fourth Generation Genestealer Hybrid who utilizes a custom-built Vox Scrambler Array which allows them to hack into enemy broadcasts and send their own message across it. They are also able to intercept signals and learn enemy troop movements and tactical dispositions. Their destabilizing influence is even more crippling when combined with the powerful psychic resonance of the Cult's Patriarch. For many Cult members, the orations of the Clamavus are the closest they will ever get to hearing the word of their Patriarch.[2]

Clamavuses are blessed with a stronger link to the gestalt psychic aura of the Cult. While they can't wield this power in the way a Magus can, they instead use it to transmit nullifying and distorting waves similar to the Shadow in the Warp via languages and vox-signals. When overheard in close proximity, this audible virus causes a devastating psychic overload that causes those in earshot to undergo intense pain and cranial rupture. To the Clamavus, they believe that those that die before them were simply not worthy souls for their cult's salvation.[2] 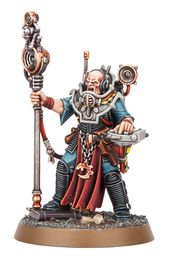