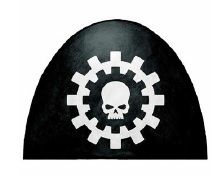 Clan Dorrvok holds dominion over the testing grounds of Oraanus on Medusa, where all new recruits must face grueling regimen. Its Neophytes have recently completed the Gene-Seed implantation ritual known as the Taking of the Soulsteel where recruits purge themselves of pain, anger, and fear and replace it with mantras of cold logic. After this, the Neophytes are charged with especially dangerous weakness to cull out any of the weak. Such a violent trial by fire takes its tool and many do lot live to attain the rank of Battle-Brother, yet those who do are tempered through war into more than they once were.[3]

Clan Dorrvok is unique in that its numbers far more than a hundred active warriors. This is due to the fact that it contains all of the Iron Hands Aspirants and Neophytes. Only in this Clan does bloodline and lineage intermingle to such a degree. Indeed, while training recruits are not allowed to bear markings or practice traditions of any other clan save that of Dorrvok. Only upon full elevation to Battle-Brother do they take their original clan identity once more. Those of Dorrvok's own remain within the Company, guiding fresh cohorts through trials and joining its 100-strong Vanguard Space Marine squads or acting as Scout Sergeants.

The recruits of Clan Dorrvok are also taught to exorcise themselves from all weaknesses of the flesh and become cold, logical warriors.[1b] Technologically, Clan Dorrvok is known for their lightweight Bionics.[2]

The Clan is known to have taken part in the War for the Ulmetrican Reach.[1a]