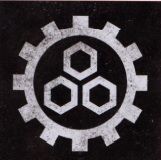 Clan Raukaan, known as the "Firehearts" are one of the Clan Companies of the Iron Hands currently recognized as the 3rd Company.[5]

With a reputation for unpredictability, some on the Iron Council say Clan Raukaan has broken with logic in favor of emotion. However none can ignore their achievements, and many fleets of the Indomitus Crusade have been thankful of the Clan's unorthodoxy. That being said, their unpredictability has also led to suffering such as in the doomed Sabbyst Planetstrike. It is thanks to the efforts of Iron Father Feirros on the Iron Council that Clan Raukaan has maintained its status as the 3rd Company but the Clan's enemies wait for a moment for him and Iron-Captain Klaarc Kalag, to slip up. The clan's sacrifices are immortalized by a large number of Dreadnoughts even for the standards of the Iron Hands.[5]

The Clan itself suffered heavy losses after the Skarvus Ambush and were subsequently led by Iron Father Kristos until the Gaudinian Heresy, when Kristos became corrupted by Slaanesh.[3b] Arven Rauth assumed control of the Clan in the aftermath of the Gaudinian Heresy, and he led Raukaan in the Purging of Contqual against the forces of Chaos in 812.M41.[1b][1c] Later, they took part in the Battle of Medusa during the Thirteenth Black Crusade.[2] Since the formation of the Great Rift they have also experienced glory during the Indomitus Crusade but also incidents of shame such as strife with the Imperial Fists at Xalladin. Iron-Captain Sind Grolvoch was killed in the Sabbyst Planestrike by Fulgrim himself and in the aftermath Klaarc Kalag has taken command.[5]

Marines of the Clan are known to speak in a Medusan dialect known as Tergiza.[1b] 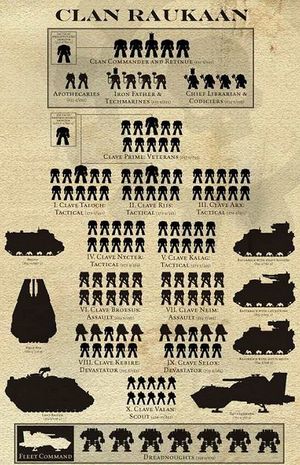