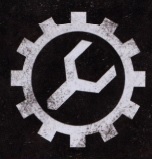 Clan Sorrgol, known as the "Watchkeepers", is a Clan Company of the Iron Hands Chapter of Space Marines.[1] It is currently recognized as the 6th Company.[2]

Of all the clans, only Sorrgol have shown the inclination to continue their nomadic travels into the stars. It is said that the Sorrgol construct primitive rockets in an attempt to reach space, only for them to explode within seconds of taking off. However the yearning still manifests within those Sorrgol chosen to become Space Marines and this spirit endures within their Company of the Iron Hands.[2]

Originally, the attempts to colonize space were dismissed as a waste of resources by the Iron Council. However today the Clan is charged with protecting the Medusan Reach which extends into multiple System's. Most of these worlds are those able to contribute raw materials to feed the forges of the Iron Hands in exchange for protection. As such, they are deployed across many worlds and practice a swift style of warfare which balances methodical doctrine with focused urgency. Orbital assaults are followed by mechanized onslaughts, with Repulsors, Razorbacks, and Rhinos deploying even as Drop Pods first smash into a world. Thus do the Sorrgol claim that they conclude campaigns faster than any other Clan. Unlike the Ultramarines, Sorrgol does not linger on a world after the battle has been won. Instead they simply take to their ships and seek out the next battle. But when a world's resources run dry or its usefulness has run out, Sorrgol may abandon it.[2]