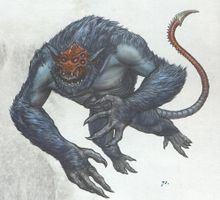 The Clawed Fiends are an alien species, originating from the Donorian Sector [1]

These semi-sentient monsters care nothing for civilisation or war, only for their animalistic instincts of consuming prey.[2] They are hulking monsters of muscle and fur with incredible senses capable of perceiving multiple spectrums at once, and are known to be at their most dangerous state after having been wounded as the scent of their own bleeding ichor sends them into a berserk fury that few warriors will be quick enough to escape.[3]

Clawed Fiends are made use of by the Dark Eldar, as long ago the Webway Portal leading into the Donorian system was destroyed by the force of a Warp Storm, splitting the portal apart and allowing Clawed Fiends to enter and infest the adjacent Webway tunnels. Since then they have become one of the main creatures used by Beastmasters, who capture them for bloody hunts in the gladiatorial Wych arenas of Commorragh or for use as war-beasts in Real Space raids.[3]

Clawed Fiends first appeared as a simple illustration of a 'Clawed Fiend of the Donorian Sector' in the diagram "other dangerous aliens", along with early versions of a Kroot warrior, Necron, Tarellian dog soldier, a Nocturnal Warrior of Hrud and other minor species, in the 3rd Edition Rulebook.[1]