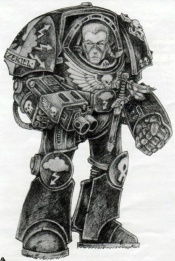 Cloud Runner, also known as Ezekiel, was a Space Marine Captain of the Dark Angels' 1st Company. He is notable for leading a detachment of 1st Company Terminator brethren in cleansing a Dark Angels recruiting world of Genestealer taint. This action led to the entire Dark Angels 1st Company becoming styled as the Deathwing.

Cloud Runner grew up on a world dominated by feral tribes. By the age of 12 he was betrothed to Running Deer, the daughter of his tribe's shaman. Becoming embroiled in a youthful counting coup competition, he (along with a fellow tribes-member and rival, Silver Elk) elected to climb Ghost Mountain and visit the Abode of the Ancestors: a perilous journey from which they were not expected to return. Running Deer, failing to convince him to stay with her, presented him with a gift of a charm made from a braid of her hair, so that he might return safely home (he would wear this braid around his neck throughout the rest of his life). Upon reaching the Abode of the Ancestors, Cloud Runner was unexpectedly confronted by a squad of Dark Angels Space Marines that included his grandfather's grandfather, Hawk Talon. For the plains world of Cloud Runner and his fellows was a recruiting world for the Dark Angels Astartes Chapter. Cloud Runner was subsequently accepted for training and left his home, his betrothed and his former life behind.[1]

The only notable mission Cloud Runner - now known as Ezekiel - is known to have taken part in occurred 120 years before the fateful mission to the plains world. The Hive World of Thranx had refused to pay tithes for twenty years, and a sizable Imperial force was dispatched to rectify the situation. Led by Inquisitor Van Dam, elements of the Dark Angels, Space Wolves, Ultramarines and the Necromundan Imperial Guard discovered that the world was lost to Genestealer infiltration. Eventually, the planet was subjected to Exterminatus. Fighting alongside Cloud Runner during this campaign were several Marines later to join him on the plains world, including the Librarian Two-Heads Talking and the Sergeant Lame Bear. Cloud Runner, now Ezekiel, ultimately rose through the ranks to become the Captain of the Dark Angels' 1st Company.[1]

Cloud Runner's role in history was settled when he was selected to command the next recruitment mission sent to his homeworld. Upon landing on the world in the special shuttle always used for this mission, known as Deathwing (which was named either after a belief native to the planet that a great fiery bird called the Deathwing took one to judgement after death and to perhaps join the warriors in the sky, or more likely actually created the belief in the first place), he and his detachment of thirty 1st Company warriors discovered that the world had been seriously compromised by Genestealer infection. The recruiting tribes were destroyed, their descendants gathered into a great industrial city under the thrall of the Genestealer Cult. Instead of acting as a Space Marine Captain and enacting the process of Exterminatus, Cloud Runner elected to view the situation as a tribal war-chief, and he and his men decided to embrace battle. Believing themselves certain to die in their upcoming combat, they undertook the tribal Rite of the Deathwing, where warriors destined to die gird themselves for death by painting themselves white, the funeral colour. Cloud Runner and all his men therefore repainted their Terminator armour bone white.[1]

Entering the Genestealer-controlled city, Cloud Runner led his Deathwing Terminators on a direct assault at the heart of the Cult activity. With the death of their Patriarch — slain by Two-Heads Talking - the Genestealers suffered from a lack of direction and crippled morale for some time, enabling the Marines to reap tremendous numbers of enemies slain. However, the Cult managed to rally in their underground lair and counter-attacked the Marine force, instigating a tremendous close-quarters battle. At the end of the battle, when all the Cult members were killed, only six Terminators still lived, Cloud Runner amongst them.[1]

Instead of returning to the Dark Angels, the surviving Astartes decided to attempt to save their peoples' future by recreating the tribal system. Dividing the populace amongst themselves, they separated, each leading a sixth of the natives away to watch over and reeducate. Eschewing their Terminator suits and responsibilities to their Chapter, the 1st Company Veterans instead embraced their responsibilities to their people and chose to guide their tribes back to the way of life that existed before the Genestealers.[1]

Ten years after this incident, the Dark Angels sent a follow-up force to the world to determine what had happened to their recruiting party. This force - led by the new 1st Company Captain, Broken Knife and including the Dreadnought Hawk Talon - discovered and interrogated Cloud Runner. Judging his actions worthy, Broken Knife elected to leave things as they were, with the exception of recovering the (still white) Terminator suits. Cloud Runner requested that, as a favour, Broken Knife leave those suits as they were in order to honour the fallen. Broken Knife's agreement to this request would eventually result in the entire 1st Company of the Dark Angels becoming styled as the Deathwing.[1]

It is not known what became of Cloud Runner and his surviving tribal chiefs after this. Already over 200 years old at the time of the mission to the plains world, he supposed he had but a few more years left in him and noted his physical and mental tiredness - shortly before engaging in a feat of combat that was to become legendary. His kinsman, Hawk Talon, however, was certain that he and Cloud Runner would not meet again after their last recorded parting; if recruitment parties only return to the plains world every 100 years, the implication is that Cloud Runner - who by this time had been living as a simple tribal for ten years - would not survive another century.[Needs Citation]