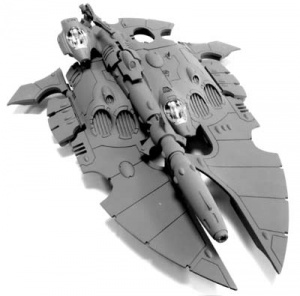 The Cobra is an Eldar Engine of Vaul, a Super-Heavy Tank which combines the speed and grace of Eldar anti-grav technology with terrifying firepower. In Eldar mythology, the cobra was the brother of the serpent but a short-tempered, fickle ally, to whom the serpent turned to for aid only during the darkest days of the War in Heaven. The Cobra is a war engine hunter, utilizing terrifying weaponry designed to destroy enemy super-heavy vehicles and Titans in a single blow.[1][2][3]

The Cobra is built upon the same chassis and utilizes the same gravitic motors as found on the Scorpion, giving it similar speed, mobility and protective qualities, including the use of a Titan-grade Holo-field.[1][2] As well the number of crew is kept to a minimum (a pilot and gunner), so that more Eldar can be freed up to perform other battlefield duties.[3] The biggest difference between the two, though, is the Cobra's armament, a single massive hull-mounted Distort Cannon, or "D-Cannon." A direct hit from the D-Cannon will tear apart whole sections of even the largest Titan, dragging machine and crew screaming into the nightmarish hell that is the Warp. Even Void Shields provide no defensive barrier against this massive vortex weapon.[1] Battlefield reports tell of whole sections of reality torn away after the Cobra's main weapon fires, leaving nothing in its place.[1] The only consolation is that the D-Cannon does not have the same range as weapons found on the Scorpion, and in comparison to its brother the Cobra loses some versatility in exchange for its firepower.[1][2]

Besides its D-Cannon the Cobra also mounts a smaller secondary weapon, either a Bright Lance, Eldar Missile Launcher, Scatter Cannon, Shuriken Cannon or Starcannon. Some Cobras are also upgraded to include Star Engines and/or Vectored Engines.[3] 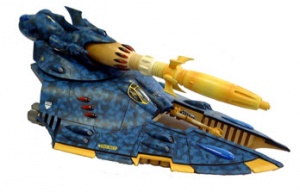