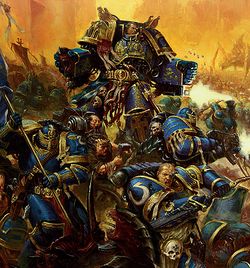 The book has 80 pages and the cover is printed in colour while the majority of the book remains in black and white, although there are several pages of colour images of miniatures at the back of the book. The cover features Marneus Calgar and his Honour Guard fighting a large Tyranid force, supported by Terminators and other Ultramarines formations. The back cover image is of a unit of five Ultramarines Veterans surrounded by Ork Boyz and what could be at least one Ork Dreadnought.

This book contains a complete army list for using a generic (or codex) Space Marine army. Further special rules, equipment as well as a Traits System is included.

This book contains background information and fiction on:

This book contains background and special character rules for: