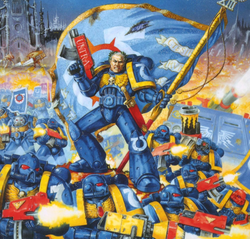 The book has 97 pages and the cover is printed in color while the majority of the book remains in black and white, although there are several pages of colour images of miniatures.

This book contains a complete army list for using an Ultramarines or any generic Space Marine army. Further special rules and equipment were included.