The Black Templars are the most zealous of all the Space Marine Chapters. To them, the Emperor is a literal deity, and there is no oath they will not swear, vow they will not take, nor bloody act of battlefield worship they will not perform in his name. Successors of the mighty Primarch Rogal Dorn, the Black Templars retain their gene-sire's indomitable spirit and channel it into their ferocious crusades. The warriors of their Fighting Companies storm towards the foe, festooned with crusader oaths and blessed relics, bellowing prayers to the God-Emperor. With miraculous warriors like the Emperor's Champion striding in their midst, and bespoke formations such as their Crusader Squads and Sword Brethren leading their charges, the Black Templars annihilate all in their path.[1] 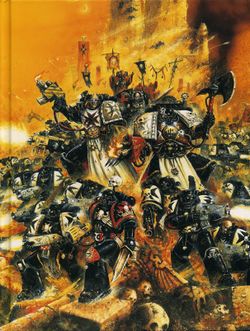