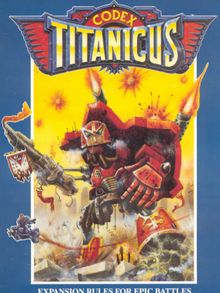 The first Codex: Titanicus is an expansion for Games Workshop Adeptus Titanicus game system and was published in 1989.

It adds the forces of the Orks and Eldar as well as contains rules for more Imperial Titans, Dreadnoughts and Robots. The supplement also contained eratta and corrected a few minor problems with incompatability between the two previous games.

The following people were important in the production of this book.