Colonel Colm Corbec was the second-in-command of the Tanith First and Only Imperial Guard Regiment from almost the inception of the regiment in 765.M41. 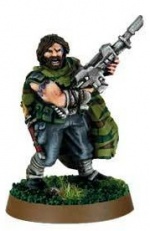 Colm Corbec began his career as an apprentice to his father, who was a machine-smith and furniture-maker. After he grew too old to help his father, Corbec switched to working in the lumber-mills, the main industry of Tanith. He worked there for a long time, eventually developing a serious cough caused by the sawdust in the atmosphere. Corbec decided that a healthier job would be a good idea and joined the Tanith Magna Militia. From there, his path to the Guard was easily-trod.

Originally a standard Guardsman, Colm Corbec was promoted directly to the rank Colonel after the Fall of Tanith by Colonel-Commissar Ibram Gaunt. He quickly formed a bond with Gaunt, and the two eventually became firm friends - Gaunt once in fact described him as a "brother" - although Corbec remained just as close to his comrades in the ranks, particularly Hlaine Larkin, the famed Sniper and Tolin Dorden, regimental Chief Medical Officer. Corbec had actually been delivered by Dorden when the doctor was the County Pryze practitioner, and also felt that he owed Dorden his friendship due to the fact that Dorden saved the life of his mother, Landa. Despite initially entertaining doubts about his ability to command - particularly in his ability to issue orders that may have lead to the deaths of his soldiers - Corbec proved to be a charismatic, straight-talking and somewhat unconventional officer who appeared to be universally liked by his entire regiment, if not by everyone he happened to meet; Corbec and Colonel Gilbear of the Volpone Bluebloods came to serious blows on one occasion.

Normally found leading the Ghost's 2nd Platoon, during the Caligula Liberation, Colonel Corbec was forced to lead the entire Tanith regiment without the aid of Colonel-Commissar Gaunt, including devising a strategy to deal with a daemonic entity. This experience finally gave Corbec the courage and self-belief to fully embrace the responsibilities of command. Corbec was a truly heroic man, who regularly appeared to perform feats of daring, recklessness, bravery and skill in combat. For example, he held the gate of the Nacedon field hospital by himself, armed with his lasrifle and a flamer, against hordes of cultists; he took a pig-tooth from the yard after this event to act as his lucky charm. Corbec wasn’t scared of much, but he did have a phobia about space-travel that lasted for several years. He carried bad memories of the time he was captured by Pater Sin and forced to watch the cruel murder of Trooper Yael; however, Colonel Corbec avenged Yael by killing Pater Sin on Herodor.

Badly wounded several times during his career, Colonel Corbec was shot dead by the traitorous Trooper Liijah Cuu while protecting the Beati on Herodor. Out of respect for his close friend, Gaunt had Corbec buried in a coffin made completely out of nalwood, wood native to Tanith which is extremely rare after the planet's destruction.

Corbec was a big man, bigger than most Tanith, but not as tall as the notably lanky Ibram Gaunt. His size and bulk enabled him to have some success as a wrestler before joining the militia; he was Pryze County Champion three times running. He was pale, blue of eye and dark of hair, like most Tanith and always sported a bushy beard that was just slightly greater than regulation length.

Gaunt in fact once despaired of his second's appearance, wondering how he was possibly going to enforce uniform discipline in the men when the colonel of the regiment looked like a "matted and tangled old man of the woods."[1]

His arms were thickly muscled, and tattooed with blue spirals. A regular smoker, showing a preference for liquorice-flavoured cigars after trying some given to him by a Basilisk commander from the Ketzok ‘Serpents’, Corbec was missing the little finger from his left hand, which had been chopped off in combat. He preferred to sleep outside in the open air, if possible and had several hobbies, including wood-whittling and carving, birdwatching and of course, drinking with his men.