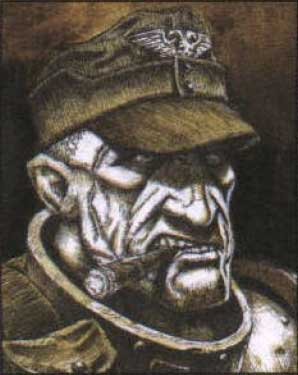 Colonel Schaeffer is an officer of the Imperial Commissariat and the commander of the 13th Penal Legion, also known as the "Last Chancers".

While most Imperial citizens, especially the rank-and-file of the Imperial Guard, believe that Penal Legion troopers - often murderers, traitors, blasphemers, thieves, rapists and other assorted scum - should be executed for their crimes, Schaeffer is a firm believer of granting a "Last Chance" for his men to redeem themselves. He provides this chance by leading them into suicidal missions.[Needs Citation]

Those "fortunate" enough to be offered recruitment into the 13th Legion often choose summary execution rather than serve under Schaeffer.[1]

During their mission on Armageddon, Schaeffer revealed himself to be over three hundred years old, his life extended and his body reconstructed by Tech-priests of the Inquisition. Among his injuries, he has had his eyes replaced (the ice-blue eyes that are his most distinguishing characteristic came from a tech-priest who sinned against the Machine God), his spine rebuilt after being crushed by a tank, and his arm replaced after it was shot off by a plasma bolt. He is also a master of close combat, either with his customary power sword and plasma pistol, or hand-to-hand.

His fate after the mission on Armageddon is unknown.

In his foreword to The Last Chancers (Omnibus), Gav Thorpe explained that the concept for the 13th Legion began as a rescue team of Imperial Guard specialists, and for that reason, Schaeffer shares his name with Major "Dutch" Schaeffer, Arnold Schwarzenegger's character in Predator. Schaeffer was originally intended to be a Major, but, after conferring with Andy Jones, who suggested integrating the Penal Legions and the premise of the earlier film The Dirty Dozen, Schaeffer was "promoted" to Colonel and the nature of his "team" changed.[2]