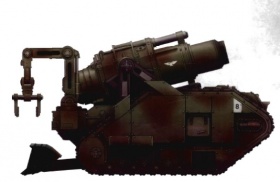 The Colossus Bombard[3] is one of the heaviest and most ancient artillery pieces in common use by the Imperial Guard, reserved for campaigns for when it's super-heavy siege cannon is required to penetrate enemy fortifications.[1][2]

The Colossus Bombard's sole weapon is its Colossus Siege Mortar, a massive weapon used to devastate enemy defenses.[1] The vehicle is one of the rarest mobile artillery pieces in use by the Imperial Guard. Sometimes based on a Chimera chassis, often a Leman Russ chassis will be used as this can better accommodate the heavy weight of its main weapon.[3] They are rarely seen, except during campaigns where their firepower is required to completely flatten an enemy position.[4] While not having the same range as an Earthshaker Cannon the mortar makes up for it in sheer firepower, launching high explosive concussion shells which use their detonation shockwave to flatten buildings and crush enemy infantry and tanks. It is also capable of firing fuel-air explosive munitions, specialized promethium shells which seed the air with fuel prior to impact, creating a devastating airburst that crushes bones, shatters rocks and even sucks the air out of one's lungs.[2]

Even with its chassis heavily modified to account for the weapon's weight the Colossus Bombard is among the slowest of the Imperial Guard's vehicles. In fact it is technically not a true self-propelled artillery vehicle as it cannot fire on the move, instead requiring a lengthy set-up process in order to fire including setting up the large recoil spade which digs into the ground, absorbing the immense recoil forces generated by firing the mortar. The Bombard also has a slow rate of fire, requiring an attached crane to load each shell into the weapon's breech as each one is too heavy for a many to carry. For these reasons Colossus Bombard are normally not deployed on the front lines, instead reserved for the destruction of static targets during a siege, remaining in place as they reduce enemy walls and fortifications to rubble. When on the move a single driver mans the Bombard while the rest of the crew follows behind in transport vehicles such as Chimera; indeed a small army accompanies each Bombard battery, manning Trojans and Sentinel Powerlifters to supply the ammunition, Atlases for emergency towing, and Salamander Scouts for forward observation.[1]

Some Colossus Bombard crews will modify their vehicle to carry a pintle-mounted Heavy Stubber or Storm Bolter and/or a Hunter-Killer Missile, while other common upgrades include Camo Netting, Extra Armour, Rough Terrain Modification, Track Guards, a Searchlight and Smoke Launchers.[1]

In the Taros Campaign only the 17th Tallarn Regiment was equipped with Bombards (six vehicles). They were kept in reserve for expected siege of Tarokeen but eventually were used to support the assault on the Phyyra Heights. It is unknown though how effective was this fire against the Kroot defenders for all of the Bombards were abandoned during the retreat of the Regiment.[3]