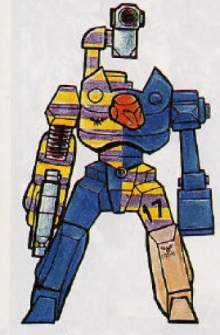 Colossus Class Robots were a type of war robot deployed by the Legio Cybernetica.[1]

A siege Robot, the Colossus uses a Siege Hammer to pound down enemy fortifications, though it is equally useful squashing opponents. Other armaments include a boltgun and melta gun. Protected by a power field/synchroniser unit, its weaponry can be replaced with autocannons, heavy bolters, and power fists, allowing for a number of combinations.[1]