Combi-weapons are guns used by Imperial and Chaos armies, and are essentially two weapons combined into one. There are two ways of designating them, either Combi-(weapon) or Bolter-(weapon).[1][Needs Citation]Combinations of meele weapons with ranged weapons can sometimes be referred to as combi-.

Used by the Space Marines since before the Horus Heresy. The Combi-Bolter is essentially two Bolters attached together. While they are no longer produced in the Imperium, in favour of the more advanced successor: the Storm Bolter, some are still held as ancient relics. They are also commonly used by Chaos Space Marines.[12]

A Bolter with a Flamer attachment.[26]

The Infernus Heavy Bolter is a heavy weapons version of combi-flamer used by the Deathwatch. The weapon incorporates a heavy bolter and heavy flamer. This weapon is mag-clamped with suspensor discs that reduce the weapon's weight.[55]

A Bolter with a Meltagun attachment.[4][28a]

A Bolter combined with a Plasma Gun or Plasma Blaster.

Used by Space Mariness, it consists of a Graviton gun combined with a Bolter.[7]

A Bolter with integrated Volkite Charger.[59]

Sons of Horus Legion Praetor with a Combi-Volkite[59]

A Bolter with an auxiliary grenade launcher attachment.

A Bolter with a Needler used presumably by House Escher of Necromunda.[10]

A Bolt Pistol with an Needle Pistol attachment.[30]

A Bolter with a Stake Crossbow strapped to the side, useful against psykers. Used almost only by the Ordo Hereticus[2] and Sisters of Battle[13].

The aptly named Condemnor boltgun strikes fear into the hearts of psykers across the galaxy. While the bolter is deadly enough, the blessed Purgatus stake-bolts fired from the crossbow mounted upon the weapon can fell Daemons and witches alike. Precious few of these holy weapons are to be found, but they are a potent instrument against those who wield the powers of the Warp.[14] 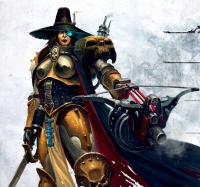 Inquisitor Greyfax with a Condemnor Boltgun[33]

Extremely rare weapons used by some Space Marines. These relics of the Dark Age of Technology combine a Bolter with a secondary Disintegration Gun.[9]

Developed as a hybrid of later pattern Imperium bolt weapon designs and Dark Age of Technology 'Adrastite' disintegration beam weapons prohibited from general Great Crusade issue, the Adrastus bolt caliver is a potent shoulder arm serving as a portable heavy weapon for the Legio Custodes. This combination weapon is able to unleash a fusillade of explosive rounds at long range with the potency of the heavy bolters carried by the Legiones Astartes, or at shorter ranges fire a disintegration beam able to rip a target apart at a molecular level, causing its victims to cease to exist in a howling flare of energy.[39]

A Sagittarum Guard Custodes with a Adrastus bolt caliver[40]

The Plasma Blaster is essentially two plasma guns combined. It has a somewhat shorter range than plasma guns, but when fired both of its chambers are discharged which double the damage output. These weapons are more reliable than modern plasma guns, as plasma technology was far better understood at the dawn of the Imperium. Dating back to the era of the Great Crusade, these weapons are all but unknown in the battlefields of the 41st Millennium, although a few remain as relics within the armouries of the Adeptus Astartes. Saul Invictus, First Captain of the Ultramarines during the First Tyrannic War, is noted as having wielded a Plasma Blaster in battle.[41][42]

Used by House Van Saar on Necromunda. It consists of a Melta Pistol and a Laspistol.[17b]

Used by House Van Saar on Necromunda. It consists of a Plasma pistol and a Laspistol.[17b]

Consists of a Plasma Pistol with Stub Gun attachment. Used by House Goliath on Necromunda.[36] 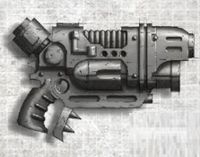 The Combi-Fist is a Power Fist with a ranged weapon attached to it.[46]