From Warhammer 40k - Lexicanum
(Redirected from Commandant of the Schola Progenium)
Jump to: navigation, search 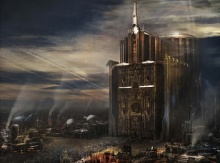 The Schola Progenia are academies run by Missionaries of the Ecclesiarchy. These schools teach and train orphans of Imperial officials who have given their lives in the service of the Emperor of Mankind. These orphans are indoctrinated into the Imperial Cult from an early age, and soon learn to regard the Emperor as their spiritual father. [1]

Graduates of the Schola are known as Progena, and because of the loyalty their training has instilled in them, they are frequently sent for further training and service within other Imperial organisations. Progena are often earmarked for roles that call for the most rigorous dedication to the Imperium. These roles can include Tempestus Scions, Commissars of the Imperial Guard, officers of the Imperial Navy, Imperial Assassins and even budding Inquisitors. Female Progena typically join one of the Orders of the Adepta Sororitas, while males more often join the ranks of the Tempestus Scions[4].

The Schola itself is overseen by a Commandant, who is one of the lesser members of the Senatorum Imperialis.[3]