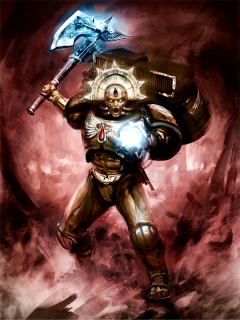 Luis[8] Dante was born in 447.M40[6a] on Baal Secundus (Baal's second moon) and his growth was stunted by malnutrition and radiation. When he took part in his clans trials at the Place of Challenge he showed no special promise, but nonetheless survived. Afterwards he was inducted by Chaplain Malafael into the Blood Angels Chapter as an Aspirant under Sanguinary Priest Araezon. He first drew notice when during his transformation after drinking the gene-seed synthesized blood of Sanguinius, he went into a year long coma and cried out the names of fallen primarchs, dark gods, and long-banished Daemons. Upon emerging Dante was trained to become a battle-brother, then - Brother-Sergeant.[5] He reached the rank of Captain in 753.M40[6b] Later he took part in the Kallius Insurrection of M40, where every Captain of the Blood Angels but Dante himself was slain, and it was decided by the gathered Chaplains and Sanguinary Priests that he would become the new Chapter Master.[5]

In the closing days of the 41st Millennium, heroes like Dante were points of light in the growing darkness. He stood, as he had done for a millennium or more, between the enemies of Mankind and the Imperium.[3]

Yet for all of his success, or perhaps because of it, Dante had grown weary of his burdens. He had lived far longer than he should, and the burden of centuries grew even weightier. Only one thing prevented Dante from succumbing to ennui- recorded in the Scrolls of Sanguinius were the Primarchs visions of a great battle to overshadow all others, where one golden warrior would stand between his Emperor and the darkness. For many generations of the Blood Angels, these prophecies had been read as Sanguinius's foreknowledge of his own fate. Yet through some instinct- perhaps a lingering trace of his Primarch's fabled far-seeing eye, or his own prophetic dreams of the golden warrior [8a], Dante believed otherwise. He frequently believed that one day, the defence of the Emperor would possibly rest in his hands, and he aimed to fulfill that final duty.[4]

This belief would come to be understood finally during the Devastation of Baal, when Dante led the Blood Angels and their successor chapter's in a final stand against Hive Fleet Leviathan. During the battle Dante managed to slay the Swarmlord but was badly wounded in the process. As he lay dying, he saw a vision of the Sanguinor and Sanguinius himself. Relieved that his duty was finally over, Dante was about to pass into death when Sanguinius told him to live and that his time was not yet done. Distressed, Dante begged Sanguinius to let him die and take his soul with him, but was suddenly revived on the battlefield.[8b] Fortunately for the Chapter Master, Baal was saved by Roboute Guilliman and the Indomitus Crusade, [7] who commended him for saving half the galaxy from the terror of the Hive Fleet [8b]