"Each must find their own way. If those in our heartland had witnessed the savageries of the void as have we they would know this. The hand of each of the starfarers is turned against the other; none will join their strength together just to see their ancient enemies prosper. Neither should we."[2d]

Even before he was known as Shovah, the young Vior'lan absorbed and memorized every facet of the Vior'la Fire Warrior training academy. He spent much time in the Mont'yr Battle Dome war simulations and quickly became able to memorize the Code of Fire from end to end. He even deciphered the combat codes and signals used by his superiors, taking advantage of his knowledge to monitor their communiques. Despite being several years younger than most Tau within the Mont'yr Battle Dome, Shoh quickly outperformed his classmates. During Shoh's graduation from the academy, the legendary Commander Puretide was there to inspect the ceremony.[4c]

Immediately after graduation and induction as a Shas'la, Shoh and his graduating class were immediately deployed to a warzone, combating the Arachen incursion of the Western Veil. Shas'la Shoh made a great impact on the spirit of the Fire Caste troops stationed in the Veil, and was closely observed by his old teachers that saw great potential in the young warrior. Other former instructors had become disgusted with his arrogance. As a result, instructors such as Sha'kan'thas made sure Shoh was assigned on the frontline in every deployment on the Western veil. If he was a prodigy born for glory he would rise to the challenge, if not then a troublesome student would be out of the way. Despite these challenges, Shoh preformed well against the Arachen for the next four years as a Shas'la trooper.[4d]

By the end of his tenure as a Fire Warrior, it was Shoh's suggestions that determined the vast majority of his unit's battle plans against the Arachen. His superior, the Cadre Fireblade, was eager to test his mettle in the Trial by Fire. The Trial proved to be a traumatic experience for Shoh, with many of the instructors wishing to finally teach him a lesson. As a result he was put into a near-hopeless live-fire war dome exercise and died in the simulation saving a teammate. Nonetheless when he awoke from the simulation, he was informed that only Shas'la who died in the exercise would be promoted to Shas'ui. As a result, Shoh could finally pilot a Battlesuit.[4d]

Shoh was initially assigned to a Broadside Battlesuit team and sent back to the Arachen War front. During the days he learned the basics of Battlesuit command from the veteran pilot Shas'vre Ob'lotai. Shoh saw combat for the first time in a Crisis Battlesuit during the final action of the war, as Commander Dawnstone led the warriors of Vior'la into a final push. The extremely bloody battle that followed saw Shoh lose most of his left leg. Nonetheless he preformed well in the battle and was promoted to Saz'nami and led the assault that killed the ruling Arachen council, Arachen Trinity. The assassination proved to be the final straw that broke the Arachen hold on the Western Veil, and the Tau emerged victorious after the long war. However tragedy struck during a boarding operation of an Arachen cocoon ship led personally by Dawnstone. During the boarding the Tau team came up attack from a swarm of Arachen Skitterlings, and Shoh sacrificed himself to save Commander Dawnstone.[4e]

Shoh nonetheless soon awoke in a med-bay, where Dawnstone revealed the entire operation had just been a simulation, another Trial by Fire. Shoh's performance during the simulation was so impressive that he was made a disciple of the legendary Commander Puretide alongside Kais and Shaserra. Under Puretide, Shoh was able to master every aspect of the Tau art of war.[4e] He even made a point of following every presentation made by the Earth Caste on military equipment that he could, to the point of risking being labelled vash'ya (between spheres), a state of mind forbidden by the Ethereals.[7] 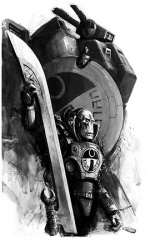 Farsight's first and greatest victories were won in the Arkunasha War.[2c] When the Tau colony there was threatened by Waaagh! Dok under Warboss Toofjaw, he led the Fire Warriors in a masterful defence against many times their own numbers. Using the immense canyons and gullies criss-crossing the desert to maximum effect, O'Shovah set the Ork invaders to chase shadows, constantly boxing off and destroying isolated elements wherever they turned at bay, earning him the famous title "farsight" for his actions.[2c]

Possibly because of his ongoing battles against Ork forces, O'Shovah believes that close combat is a vital part of warfare, unlike most other Tau. As the Orks were falling back, O'Shovah's Ethereals were systematically killed by an unknown force during battles on Arthas Moloch[3], and he came upon the Dawn Blade. It is true that towards the end of the war O'Shovah was in turn surrounded and besieged by massive numbers of Ork forces in the natural fortress of the Argap Highlands, but even then his Fire Warriors held the mountains for months until the last remnants were evacuated. Some believe that the Commander was embittered by the bloodshed of siege and blamed others for failing to break through the encirclement. Instead the Ork forces were allowed to batter themselves to a standstill against O'Shovah's defences before being easily scattered the following year. During the conflict, O'Shovah authored the Book of the Beast, which detailed Ork psychology and doctrine.[4e]

O'shovah became the renown master of the Mont'ka — aggressive tactic of the Tau forces.[6]

O'shovah was again called upon to defend the Tau Empire during the incursion of Tau space by the Imperium of Man in what the Imperium called the Damocles Crusade. He was a major morale booster during the campaign, and after nearly being killed in combat against then-Assault Marines Cato Sicarius and Jorus Numitor pledged revenge against them.[7] After the Imperial forces withdrew he lead one of several reclamation fleets to recapture Tau worlds lost to the Imperium eliminating Imperial deserters and abandoned guardsmen then Farsight continued his explorations well beyond the known Tau space.[Needs Citation]

Following the Damocles Crusade, Aun'va recommended an expedition to rekindle hope and spirit in the empire, which had been dwindling since the bloody war against the Imperium. In the ensuing Farsight Expedition, Farsight led an enormous Tau fleet across the Damocles Gulf, going into frozen stasis to avoid aging during the long trip.[4f] In the ensuing campaign on the far side of the Damocles Gulf, Farsight was initially beaten at every turn by Grog Ironteef, the Ork Warchief of Alsanta. A frustrated O'Shovah nonetheless eventually was able to defeat Grog, and pursued scattered Ork forces to the world of Arthas Moloch. There, Farsight encountered a terrifying new enemy (likely Chaos Daemons) which emerged from a mysterious portal erected on a great Dais. During the battle, all of Farsights accompany Ethereals were killed by gruesome creatures, and Farsight was only able to attain victory thanks to discovering a mysterious blade he used to close the portal. The experience of battling these foes and gazing into their sinister portal rattled O'Shovah, who realized there were far greater threats than the Ethereal's were telling him.[4g]

Break with the Ethereals

After the incident on Arthas Moloch, Farsight returned to his established holdings on the far side of the Damocles Gulf. Farsight began to secretly become highly distrustful of the Ethereal Caste, coming to suspect that they may be controlling the Tau by more than simple charisma and wisdom, perhaps employing more sinister methods. In the aftermath of his victory, Farsight came to realise the threat of Chaos and the fact the universe was not the orderly rational place described in Tau philosophy. He also came to the realization that the Ethereals as a caste knew something of this but had kept it from the Tau.[4b] At first he merely thought their leadership was flawed, that the other castes would be better off seeking harmony with each other without their oversight. But the more he though on the instances where obedience to the Etherals had been taken to illogical and foolish extremes. Worse, many of the actions taken under their guidance had seemed at the time both wise and necessary seemed now deplorable and wrong.[4b] In addition, Farsight began to live far beyond the normal life span of a Tau.[4h]

The inevitable conclusion that the Ethereals' control extended beyond simple logic and loyalty to something darker drove him to sickening panic. Heresies began filling Farsight's mind, and not even he truly knew why. The truth he held could dissolve the Empire and drive the Tau back to the Mont'au, a fate far worse than the Ethereals' rule. Unable to tell anyone this truth but unwilling to pretend or forget, Farsight chose exile over obedience. [4b]

Meanwhile in the Tau Empire, Ethereal Supreme Aun'va had discovered the death of the Ethereals on Arthas Moloch and the establishment of a seemingly independent Tau enclave under Farsight. Furious, he ordered O'Shovah return to the Empire to explain what exactly had transpired. Instead of returning to the Tau Empire, however, Farsight established a series of fortified strongholds along the Damocles Gulf. Contact was severed between the Farsight Enclaves and the Ethereals and it was finally confirmed that O'Shovah had turned his back on the Tau Empire.[4h]

Farsight later appeared during the Second Agrellan Campaign, sending in the full might of his forces alongside his former ally Commander Shadowsun. Together, the two managed an effective but ultimately doomed resistance against the Imperium. After the battle, O'Shovah disappeared and made course for T'lasa to rescue the planet from Hive Fleet Leviathan. Despite his aid to the Empire the Ethereal Council ordered Shadowsun to immediately capture him, something she secretly leaked to the exiled commander to try and help him get a headstart.[5]

Farsight pilots an XV8 Crisis Battlesuit with a number of improvements, including an advanced Hazard Suite developed during the Arkunasha War.[7]

Farsight does not leader a conventional bodyguard, instead he draws from a band of warriors known as The Eight. The eight is notable for having a number of Shas'o in its ranks, rather than the normal shas'vre of a bodyguard. It also includes an AI controlling a Broadside suit, a tau warrior sealed in his suite as a life support aide in the fashion of an Imperial Dreadnought and even a member of the Earth caste piloting a modified Riptide.[4i]