Knight Commander Pask is a renowned Cadian Tank ace, having gained a reputation for an exceptional understanding of armored vehicles and warfare[1]. 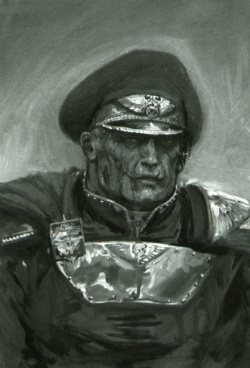 Rise of a Legend

Pask first came to prominence as part of the Cadian 423rd Armoured Regiment when they battled against Waaagh! Gutcutta on the planet Cyris. Pask was assigned to the Leman Russ Battle Tank "Hand of Steel". The battle raged and an Ork Bonecruncha eventually smashed through the Imperial lines, its Deff Rolla flattened the tank's turret and killed the Hand's Commander with ease. Pask assumed command of the ruined and battered tank and turned the tank around, and with the Ork Bonecruncha still smashing through the Imperial line, Pask demonstrated the twin talents which would earn him his reputation. With uncanny perception, he noticed a join on the Ork machine's back armour that had been inexpertly welded together; with equally uncanny precision, he fired a pinpoint lascannon shot that hit the join and detonated the machine's crude engines. The Bonecruncha flipped over its own Deff Rolla in a victorious blaze. The Hand, still under Pask's command, went on to rack up at least 14 confirmed armour-kills, defeating Ork Warlord Gutcutta's assault.[1]

The Hand was repaired and continued to serve as Pask's "steed" until it was finally damaged beyond repair, in a battle with Eldar Fire Prisms on Haytor's Hole. Pask was immediately offered command of a larger more powerful Baneblade, but he declined and chose to demonstrate his solidarity with the tankers of the 423rd by selecting another Leman Russ and re-christened it the new "Hand of Steel". Since then, he has repeated this ritual many times over, anointing a new Hand each time the previous one is destroyed[1].

Pask was noticed again during the Saint Cyllia Massacres in 863.M41[3], when the Commander and his company gained at least four Titan-class kills. Pask himself destroyed the feared Ravager-Class Titan Damnation Eternus, by hitting its plasma reactor with a single battle cannon shell, destroying the mighty machine in a delayed but violent explosion that lit up the sunset sky, flinging pieces of the monstrous metal hard into the blood-soaked massacre's site[1].

Victory over the Adamant Fury

In 876.M41, Pask commanded the 423rd Regiment when it confronted the Adamant Fury Titan Legion that had turned traitor at the Saint Cyllia Massacre. In the largest armoured battle fought by the Imperium since the Battle of Tallarn, the Imperium took horrific losses, but the Adamant Fury Legion was all but wiped out.[4]

Over time, Commander Pask has commanded every variant of the Leman Russ tank, and knows everything there is to know about them. He picks only the most educated and dedicated tank crew members with him, and has an eye for enemy weak spots. Only the bravest or most foolish of enemies enter the aim of the sharp-eyed Commander, and whether it is his chest-ful of medals or his feared reputation among tank forces both Chaos and Imperial, Commander Pask is a highly feared tank expert throughout the known Galaxy.[1]

Death of Cadia and the Steel Tithe

Pask did not take part in defending Cadia before it was destroyed during the Thirteenth Black Crusade, as the 423rd was traveling back from the Damocles Gulf having aided in dealing the Tau invaders of Agrellan a decisive blow. The shame he feels at not having fought and died defending his Homeworld alongside his compatriots, is tempered by a cold resolve to bring ruin to the armies of Abaddon the Despoiler. Since that darkest of days, the 423rd Armoured Regiment has achieved many victories, but now has to absorb depleted regiments from other worlds in order to maintain their fighting strength. They are not the only surviving Cadian Regiment that has done so, as having trained various Militarum Regimentos across the Imperium, the Cadians are no strangers to drilling foreign troops to fight in the style of the Shock Troops. Still, these foreign Guardsmen are not true Cadians, and there is often resentment among these proud warriors at having to formally admit lesser soldiers into their ranks. Amongst the 423rd though, Pask quashes such imprudent notions and those Cadians he fights with, are made to understand that Imperial victories are more important than insularity and nostalgic pride. Rather than petitioning new recruits from the Departmento Munitorum however, Pask evaluates the skills of the foreign tank crews he fights alongside. If a crew of Valhallan or Athonian tankers exhibits exceptional prowess in combat, they will be requisitioned by Pask himself for service in the 423rd. Word has spread of the Steel Tithe and the tankers of various regiments now vie for these summons, for to fight alongside the Imperium’s greatest Tank Commander is an honour without equal. As a result, those foreign tank crews who come to serve in the 423rd are without fail, amongst the most skilled in the galaxy. However regardless of their experience or accolades, those who are recruited in Pask's Steel Tithe are drilled as new recruits, until they have become as tempered as any true Cadian.[5]

However, according to another source, Commander Pask died leading an armored charge on Cadia during the final hours of Abaddon's Black Crusade.[6] 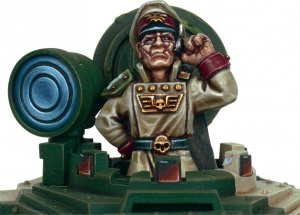