Commissar is a Black Library novel by Andy Hoare. It was released in January 2013.

Deployed to the prison planet of Furia Penitens to quell a violent uprising, the 77th Vostroyan Firstborn regiment of the Imperial Guard find themselves in a precarious position. The rebels are in a fortified prison-hive, all but impenetrable. A disgrace suffered by their forebears haunts them. And they hate their new commissar... Can Commissar Flint bring them victory and restore their reputation, or will the 77th fail again? 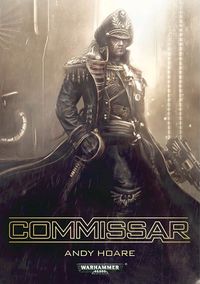