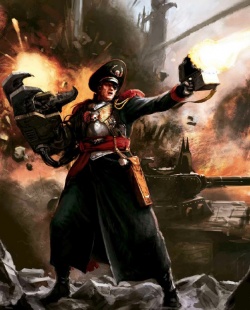 Sebastian Yarrick (known as The Old Man by the people of Armageddon[4] and as Old Bale Eye by the Orks[7]) is an Imperial Guard Commissar famous for his participation in the Second and Third Wars for Armageddon, in which he twice fought against the Ork forces of Warlord Ghazghkull Mag Uruk Thraka. His leadership and bravery during these conflicts have made him one of the greatest heroes of the Imperium.[1a]

In his youth, Yarrick had learned the Ork language from a captured raider, and became an expert in the way the Ork mind worked. Before the Second War for Armageddon began, in 941.M41, he had already served in a dozen campaigns as a commissar with Armageddon's Planetary Defence Forces and gained a reputation for unswerving loyalty to the Emperor. In fact, he was already of advanced age at the time of the War and was scheduled to retire on the day the Orks landed.[Needs Citation]

When the first warnings of the Ork landing came, Yarrick was on Armageddon to assist in the founding of the 4th Armageddon Regiment.[1b] Yarrick swiftly observed that Ghazghkull was a more cunning and tenacious warlord than previously encountered among Orks, and Yarrick ordered the planet's astropaths to send a call for help. Herman von Strab, the inept Overlord of Armageddon, insisted that Armageddon could deal with the Ork threat on its own, and banished Yarrick to Hades Hive as punishment for circumventing von Strab's authority.[Needs Citation]

Von Strab was grievously mistaken. Under his incompetent leadership, the planet fell bit by bit until the Orks reached Hades Hive. Here, Commissar Yarrick commanded the defending forces, inspiring them to a fanatical degree of bravery and resolve. Not a single soldier was executed for cowardice during the fighting at Hades Hive, even in the face of the overwhelming Ork numbers. Yarrick himself was always on the front lines during the fighting, receiving many battle wounds.[1a]

Frustrated about defiance of Hive Hades, Ghazghkull sent one of his strongest Warbosses, Ugulhard, to deal with Yarrick's resistance. As the monsterous Ork and his followers overran the hive's outer defense, the Commissar stepped forward to challenge the warboss.[7] He was grievously wounded in this duel, as Ugulhard severed Yarrick's right arm with a swipe from his Power Klaw. Such a wound would have killed a lesser man, but Yarrick's iron will allowed him to not only survive, but to decapitate Ugulhard with his chainsword and then pull the Power Klaw from his corpse and hold it aloft for all to see. The sight caused the Orks to flee in terror, while simultaneously causing the human defenders to charge forward with renewed vigour. Only after the Orks had been routed did Yarrick allow himself the luxury of passing out.[1a][7] 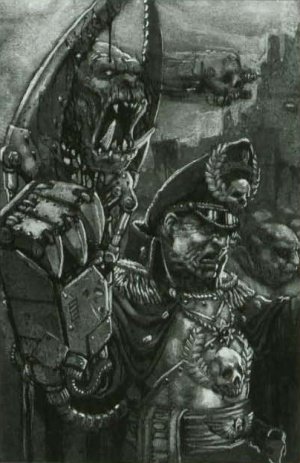 Eventually, the war ended with the arrival of Commander Dante of the Blood Angels, whom the defenders of Armageddon turned to for leadership. Although the Space Marines' offensive pushed the Orks off the planet, Yarrick's defense of Hades Hive was recognized as the turning point of the war, and he was hailed as the Saviour of Armageddon.[1b]

However, Yarrick would later vengefully return to Golgotha at the head of an army of Mechanicum which included Titans, Skitarii, and an Ordinatus engine to scour the world of Orks.[6] The Orks later counter-attacked, retaking the planet.[7]

Recently, it has been rumored that Yarrick is dead. The Bell of Lost Souls on Terra is said to have rung for him, but the exact details of his fate are unclear. Death at the hands of Ghazghkull or a returned Angron have been proposed. There is also speculation that he is not dead at all.[8]