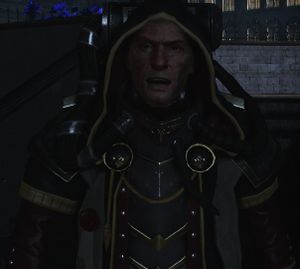 Commodus Voke was a venerated Inquisitor of the Ordo Malleus. He was a Thorian with a leaning towards Monodominant except for his exceptional psychic powers.[1a] He lived to a very old age due to being extremely difficult to kill, although he was arrogant and sometimes difficult to get along with.[Needs Citation]

Voke served under the esteemed Inquisitor Absalom Angevin during his novitiate period, during which time he participated in Angevin's many purges of Chaos cults and the burning of many heretics, one of the more notable being Pontius Glaw.[1a]

In 240.M41, Inquisitor Voke and his pupil, Golesh Heldane, were on Gudrun investigating House Glaw, believing that Pontius's corruption had spread to his family, despite their public renouncement of him and his crimes. Around the same time - following up on a lead he had discovered on Hubris — Inquisitor Gregor Eisenhorn also began investigating House Glaw, posing as a merchant in order to get in closer to the Glaw family (whereas Voke made his Inquisitorial status known).[1a]

Voke and Eisenhorn would work together on several occasions afterwards, including most notably in 343.M41.[Needs Citation]

Voke was one of the four Inquisitors who came at Eisenhorn's urging to hunt down and kill Inquisitor Quixos, who had been corrupted by Chaos. Voke's ultimate decision to join with Eisenhorn was as a result of discovering the fate of Inquisitor Hetris Lugenbrau, who had been a pupil of his comrade Pavel Uet. Lugenbrau had disappeared on Maginor over a century earlier (having, in fact, been killed by Quixos), and his loss had broken Uet so badly that it eventually resulted in his death. Voke was killed during the mission while battling the Daemonhost Prophaniti, which, much to his credit and a testimony of his incredible psychic strength, he was not simply obliterated outright. He was buried with full honours at the Thorian Sacristy adjoining the Great Cathedral of the Ministorum on Thracian Primaris. In his memoirs, Eisenhorn reflected that, although they were never friends, he occasionally missed Voke's caustic, forthright manner in the years after his death.[Needs Citation]