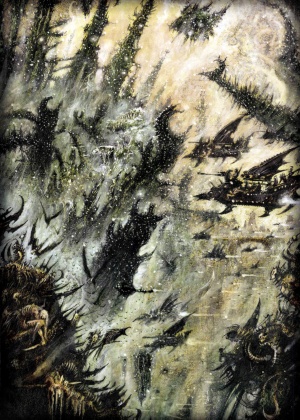 Commorragh, also known as the Dark City is the capital of the Dark Eldar society. It's located deep within the labyrinth of the Webway, the space between realspace and the Warp.[Needs Citation]

The origins of Commoragh are traced to the times of the ancient Eldar empire when it was dominant in the galaxy where it became one of the greatest Webway port-cities.[1a] Port Commoragh was established in M18 as the primary nodal port in the Webway.[1c] This allowed it the capacity to transport a fleet to any of the most vital planets of the Eldar. Its ability to access the far-flung corners of realspace led it to becoming the most important location in the entire Webway. Thus, it was considered too valuable to belong to any one aspect of the Eldar empire and was granted autonomy. However, this meant that Commoragh became outside the jurisdiction of the great Eldar councils of the time and thus attracted many to the port-city who wished to hide their deeds. In time, this realm expanded with wealth and influence reaching across its borders leading it to absorb other locations within the Webway such as port-cities, private estates and sub-realms. With each expansion, Commoragh grew even larger and more impressive as it fed upon the plundered wealth of these parts of the Webway.[1a] By M31, the Fall of the Eldar fell upon their empire which shattered their civilization forever. The unrepentant Eldar that survive this event continue to survive within the Webway between M31 to M32 that sees Commoragh become a vast realm itself and the Dark City coming under the oppressive rule of the noble houses that lurk within its heart.[1c]

Commorragh has stood for over ten millennia, and due to the difficulties of surviving the Dark Eldar way of life, combined with needing to live much longer than what is considered possible for normal Eldar, there is only one being who could possibly remember the founding first-hand: Asdrubael Vect, Supreme Lord of the Kabal of the Black Heart. In fact, Vect claims that he is the founder of Commorragh, as well as the one who discovered the way of extracting souls from living creatures in order to prolong one's life. Unfortunately, he is the only one nearly ancient enough to know whether these statements are true or false, so the validity of this claim is unknown. But it seems that by M35, Vect had achieved total dominance over Commorragh following the Imperium's raid on the city that virtually wiped out the old aristocracy.[1a]

Commorragh suffered another invasion in 227.M38, this time at the hands of Orks under the Warboss and Weirdboy Zoggit. Zoggit led his forces through a Webway rift, emerging in the Commorrite port of Blackblood. The hundreds of thousands of Orks rampage throughout parts of the city until the local Kabals are able to isolate and destroy each individual mob piece by piece. Commorragh suffered heavy damage during the battle, with several districts destroyed. However the Dark Eldar still managed to benefit from the attack, using 10,000 captured Greenskins for a grand gladiatorial spectacle in the Wych arenas.[1d]

In the closing years of the 41st Millennium, the birth of Yvraine within Commorragh created a catastrophic Dysjunction. The event destabilized much of the Dark City and opened Khaine's Gate, forcing Vect to retreat to his outposts while the city falls into anarchy. As Daemonic incursions become commonplace, Kheradruakh managed to open a portal to the realm of the Mandrakes, transforming a large part of the city into his lair. Wych Cults, Kabals, and Haemonculus Covens battle for supremacy amid the chaos.[5]

As Commorragh faced being overrun by Daemons, Vect organized a massive army led by the Incubi and counterattacked at Khaine's Gate. With his new army, Vect's attack was able to corral the Daemons into the sub-realm containing the gaping hole that was Khaine's Gate before being severed from the rest of Commorragh, becoming known as the Chasm of Woe. However the Daemons kept coming, rising from the massive abscesses created within the city. This forces Vect to plunge more districts of the city into sub-dimensions, taking entire armies and masses of slaves with them.[6a] Since then, Commorragh has been sundered into Civil War as Vect's forces seek to quell Ynnari influence within the Dark City.[8]

Within the Webway, Commoragh appears as a composite entity of impossible scale as it acts more like a vast collection of satellite realms and cities that are all linked to one another by either an number of portals or other hidden pathways. As such, the Dark City can be seen as a loose collection of far-flung nodes spread across the passageways of the Webway. The most clustered concentrations reside in a reality that are scattered across the galaxy that are thousands of light years apart in some places. However, shortcuts are present that link these points together in the form of dimensional gateways that allow the immense distances of the sub-realms to be crossed with a single step. Runic wards are present that protect Commoragh from being breached by outsiders.[1a]

There are many rumours about Commorragh, the terrifying home of the Dark Eldar, making it difficult to know just what is truth, and what has been fabricated by the shattered psyches of those unfortunate enough to find themselves in Commorragh.[Needs Citation]

The city itself is powered by the Illmaea or "stolen suns". For their energy source, the Dark Eldar copied a technique of the old Eldar Empire. Dark Eldar steal suns from the Materium, bring them into their Webway realm, and use their energies to supply the Dark City.[4]

First and foremost, it is a dimension where the forces of Chaos, and specifically Slaanesh, have very little influence. Therefore, the Webway is the location where the Thirst takes its toll the least on the Dark Eldar. Secondly, since the Webway connects virtually to everywhere in the galaxy it is ideal as a staging point for raids on other races. It's not uncommon for a raiding party to be able to run raids on an entire star system before the Imperium is able to respond, and they have no method with which they can traverse the Webway, so the raiding party can travel back to Commorragh undisturbed. Finally, the infinitely large expanse of space makes it the perfect place for a city the size of Commorragh. No single planet would be capable of supporting the sheer size of the Dark Eldar people, and no system of planets could ever hope to be as defensible as the Webway allows Commorragh to be.[Needs Citation]

The immensity of Commorragh has never been explicitly detailed, but a look at the historical records of the Eldar civilisation prior to the Fall of the Eldar, gives an idea of the necessary size.[Needs Citation]

Before the birth of Slaanesh, the Eldar were said to number in the trillions. Only a small fraction of these untold trillions of Eldar held a distaste for the hedonistic pursuits of the masses, and only that fraction left to become the Exodites and Craftworld Eldar. The birth of Slaanesh was indeed felt by all Eldar as a drain of their soul energies. But, of the Eldar who remained, those on the fringes of the Eldar Empire that were the youngest and most virtuous were not destroyed outright, simply weakened by this psychic assault.[Needs Citation] 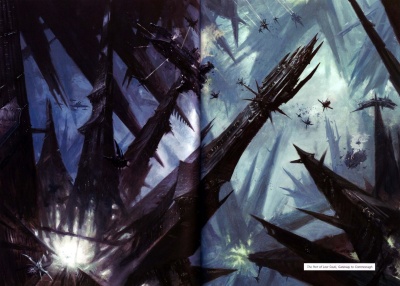 The Port of Lost Souls, Gateway to Commorragh[2]
Commorragh is split up into regions, and these regions are controlled by Kabals. The exact boundaries of a Kabal's territory are loose and ever-shifting, as they are fought over constantly. [9a] Members of those Kabals live in and police these regions, as the existence of their Kabal depends, to a large degree, on maintaining districts for its members to live in. Traditionally, Wych Cults maintain Battle Coliseums in the districts of Kabals they're allied with, Haemonculi are given laboratories (usually underground) within the districts of Kabals they provide their services to, and Mandrakes will be given the right to prowl the streets and alleys in search of meals in some cases in return they agree to assist the Kabal of the region when requested.[Needs Citation] 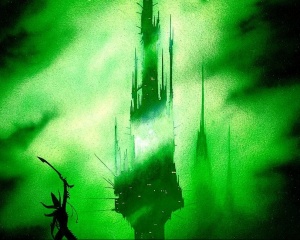 Commorragh, The Capital of the Dark Eldar

Vast numbers of satellite realms are connected to Commorragh via Webway portal, often becoming de facto part of the city itself. Many such realms were created prior to the Fall of the Eldar, originating as playgrounds of the cults of excess.[1a] Originally independent regions, during Asdrubael Vect's ascent they were variously defeated or destroyed and absorbed into greater Commorragh. Forcibly interconnected with one another, they have become sub-realms of the Dark City.[1a][1c]

The name and nature of Commorragh are almost certainly inspired by the biblical town of Gomorrah. In a Biblical tale, Gomorrah was one of the five towns of the Pentapolis and was destroyed along with Sodom after God smote it with fire and brimstone, on account of it being wicked.