And within each company, the mightiest warrior shall be anointed as Champion. He shall bear arms and armour of great craftsmanship, and he shall protect his Captain from all harm, though it cost him his life. Great honour shall be bestowed upon him in life and death, and he shall be lauded with great praise.

Roboute Guilliman, quoted in the Apocrypha of Skaros.[5a] 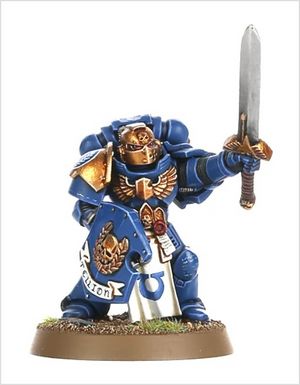 The Company Champion is the greatest warrior of a Space Marine Company, though he is not a high-ranking officer, such as a Captain or even a Sergeant. Part of a Captain's Command Squad, they can be seen fighting in the fiercest of battles.[5c]

Charged with upholding the honour of his company, his Chapter and the Emperor himself, a Company Champion's primary role is to engage enemy warlords and champions in single combat, so that their commanding officer may conduct the wider battle free from interference. They also hold key roles in conducting the various rituals and ceremonies of the Chapter.[1b]

It is commonly believed that the first Company Champions rose from the ranks of the Space Marine Legions during the Great Crusade. Most records were lost due to the Horus Heresy but there remain fragmented reports of heroes armed with shining blades and clad in mighty armor who protected legion officers and even Primarchs. What is known for certain is that when the Codex Astartes was established by Primarch Roboute Guilliman the role of the Company Champion was officially established in the makeup of each Chapter. With this being the case it is likely the role originated in the Ultramarines Legion.[5b]

Company Champions must be chosen carefully for their skill at arms could be the difference between the life and death of his captain, and therefore victory or defeat. Strictures laid down in the Codex Astartes say that feats of great personal valor mark a Space Marine for consideration, along with humility and the focus to keep their Captain safe.[5b]

Different Chapters will choose their champions in other ways, however. For example, the Silver Skulls utilize the visions of their Prognosticars to find those marked for greatness and have them trained accordingly. Another fine example would be the Imperial Fists, who hold great tournaments to select new Company Champions whenever a previous one dies in battle.[5b]

Company Champions often take to the field as part of their company's Command Squad, but they can also be placed in the service of a Chaplain or Librarian. As part of a Command Squad the champion has three key duties: protecting the captain or any other assigned officer, acting as a counselor for his Captain and sharing whatever knowledge on martial styles he may possess, and sometimes acting as his Captain's second when it is appropriate. Although technically outside the regular chain of command, a Champion would be a veteran of many wars and served at his Captain's side longer than most. The last duty can also be a great burden, for if the Champion fails in protecting his Captain's life and the battle it would bring dishonor on them both. Few Champions have ever dealt with such failure, but those that do often choose to stand down from their honoured role and take penance at their Chapter Master's discretion.[5c]

Champions also have other duties off of the battlefield. All Chapters have long-lived traditions that usually revolve around significant events. Champions represent their own companies for events where multiple companies are involved. For example, during the Feast of Blades conducted by the Imperial Fists and their successors the Chapters will nominate Champions to represent them during the great tournament.[5c]

Since a Champion will engage their foe in close combat most of the time they must be armed with formidable weaponry. In this case, most Champions will arm themselves with power swords and combat shields. As for power armor, Champions are given a unique honor. Whenever a battle-brother ascends to the role armor is crafted specifically for him. This pattern of armor is known informally as the Curadh variant and is based loosely on Aquila-pattern battleplate. It features additional reinforcement upon the shoulder guards, designed to showcase the Champion's many honors and provide better protection. Curadh armor comes with a reinforced breastplate where a Champion is allowed to display his personal heraldry. As for the helm it is deliberately fashioned to resemble knightly helms of Terra's ancient past, for the ideals of those half-forgotten warriors, are seen to be represented by the Champions. When a Champion falls in battle and his body is recovered, his armor will be placed in the Chapter's reliquary to be lauded and remembered.[5d] 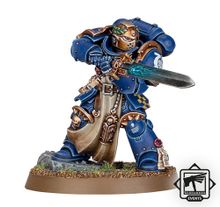