The Company of Misery are a renegade Chaos Space Marine warband. They were first encountered on Maddean IV in M37.[1]

Previously known as the Desolate Brotherhood, since the degradation of their gene-seed stocks in M32 they were assigned to impossibly dangerous and undesirable duties such as being stationed on Death Worlds, Space Hulks, and Quarantined Worlds. Each time they thought they had won reprieve, only to be sent on an even more hazardous mission. Spiraling into dissolution and despair, they finally converted to Chaos in the acidic swamps of misery. They changed their name and have since become a sworn enemy of the Imperium.[2]

Records about them bring them in connection with the terms Brethren of Mysery.[1] 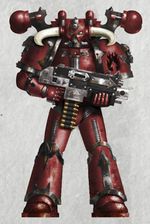 Company of Misery Brother Engvarr, the Destroyer of Dreams, first blade of the Misericordians[3]