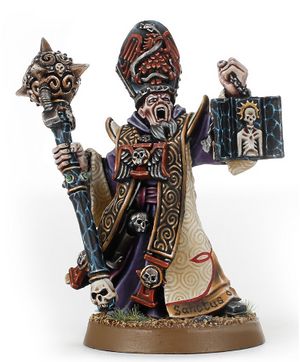 An Imperial Confessor holding a relic.

Confessors are evangelical zealots of the Ecclesiarchy. They were once Preachers but have since been promoted for their zeal.[1]

Their oratory skills can stir the emotions of entire crowds, leading them to confess personal heresies and mutations, and to betray their neighbors as psykers or other deviants. They are free to wander within an entire diocese and preach among the population. They often work on Imperial colonies with planetary governors and are especially useful on worlds where faith is lacking and the people are rebellious. With special dispensation from the Ecclesiarchy, they may even gather armies of Frateris Militia and lead wars of faith against the enemies of the Imperium. Confessors often wear the Rosarius as both protection and a symbol of their rank.[Needs Citation]

A Confessor attached to the Missionarus Galaxia is styled Confessor-Militant.[1]

Arch-Confessors are the highest rank of Confessor. These servants of the Imperial Creed are exceptional orators who can have swathes of citizens rush forward to confess their sins.[1]