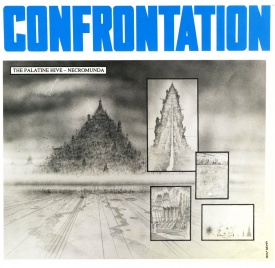 Confrontation was a tabletop wargame serialised in White Dwarf Magazine in the early 1990s. The game was never released outside of White Dwarf, but was re-born as Necromunda several years later.

Confrontation was published as a series of White Dwarf articles containing a mix of rules and background information on the Hive World of Necromunda and the various types of gang that inhabit it.

Although Confrontation shared a similar game-system and rules with the later Necromunda, there were many noticeable differences.

Confrontation had a less rigid composition of gangs, concentrating more on the type of gang rather than their specific location or allegiance, including:

Most of the weapons for Confrontation were taken from Rogue Trader, and remained in the Warhammer 40,000 2nd Edition where they were included in Necromunda. The following weapons didn't make it however:

Knives could be also thrown in Confrontation and armour was treated more individually with helmets, body armour, coifs, shields (and Power shields), specific parts of power armour and even complete Terminator armour.