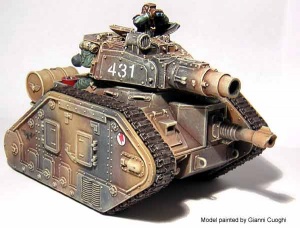 A Leman Russ Conqueror, equipped with the Conqueror Cannon.

The Conqueror Cannon is the primary weapon mounted on Leman Russ Conquerors, a short-barreled version of the Battle Cannon which fires a smaller, less destructive round.[1] However, the reduced recoil from firing the Conqueror cannon, generating a force of only one hundred and ninety tonnes,[2] provides the tank superior accuracy when on the move.[1][3a] The lighter gun, though, is ill-suited for urban combat.[3b]

Like the battle cannon the Conqueror cannon is capable of firing high explosive, anti-tank, smoke, illumination, and even Hunter shells, although not infernus rounds. The Forge World Gryphonne IV also designed a special shell just for this weapon, known as the Augur Shell. While similar to an HE shell when the Augur's impact detonator is triggered the thin shell wall splits open and the soft explosive charge is spread across the target; a microsecond later the secondary detonator in the base of the shell ignites the explosive. This causes cratering and cracking of the target's outer armour, while inside the target it produces spalling capable of damaging internal equipment and wounding or killing personnel. However the shell was not considered a success and in the end relatively few were produced.[3c]