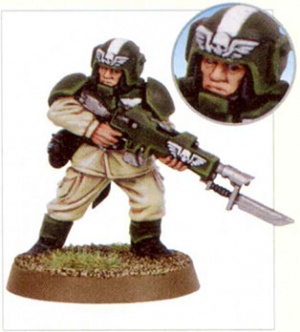 A Cadian Whiteshield conscript. Notice the white stripe on the helmet notifying his conscript status.

Conscript platoons are the most basic infantry unit available to Imperial Guard Regiments, having very little training and using only the most basic equipment.[1a]

Conscripts represent hastily conscripted men, raised from surrounding planets in dire situations. In times of great emergency, the Departmento Munitorum will demand local Governors raise vast quantities of troops for immediate action. Such measures can see entire cities or continents all but emptied and its citizens sent off to fight.[3]

Whiteshield cadets and otherwise ill-trained troops, often too young or old for normal conscription, are inducted into the Imperial Guard and rushed through basic training. They form squads massed together as a single platoon. The concentrated firepower of a large platoon tends to outweigh the relative lack of combat ability of the individual conscripts.[1a][2]

They are considered the "ultimate meat shield".[Needs Citation]

A Conscript squad consists of a massive squad of anywhere from twenty to fifty conscripts, operating as one unit. Due to their lack of training and combat experience, they are denied access to the arsenal of special weapons the Imperial Guard has to offer. Instead, the squad is issued the basic load out of flak armour and lasguns.[1c]

Conscripts are common throughout the Imperium due to their ease of raising and low cost. Some regiments, such as the Cadian Shock Troops, Valhallan Ice Warriors and the Armageddon Steel Legions employ Conscripts.[1b]