The Consecrators are a Successor Chapter to the Dark Angels[1] dedicated to uncovering the secrets of the past.[3b]

The founding of the Consecrators was initiated in secret by Dark Angels Supreme Grand Master Valafar for the purpose of seeking out and preserving the history of the Unforgiven[3c]. Prior to the 3rd century of the 40th millennium there is no record of their existence. They appear to have inherited the most revered arms of the Dark Angels Legion, preserving them carefully through the ages. They bear a close resemblance to the Dark Angels before the Horus Heresy, maintaining the Legion's original black colour and (prior too recieving Primaris reinforcements), wearing ancient patterns power armour no newer than Mark 6 "Corvus".[1][2] 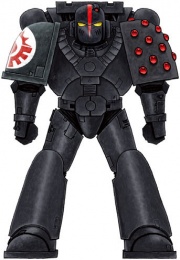 They have their own agenda and soon disappear after their mysterious objectives are complete[2]. Most of their wargear are ancient relics, taken from rediscovered Legiones Astartes depots and armouries. They are known to have sent several missions into the ruins of Caliban in their quest for ancient heirlooms of the Legion[3b]. The Consecrators use these relics in their hunt for Fallen Angels, by planting them in closely monitored locations and waiting for the relics' presence to become known. Once the Fallen are aware of the relics, some try to claim these treasures against their better judgement. Whether driven by vanity, spite or a longing for things lost, the Consecrators ensure these Fallen pay the ultimate price for their indiscretion.[13]

The chapter was first recorded in the works of the Administratum field notary Corwen Quilp, where at the height of the Second Kuppukin Schism, the entire Chapter appeared to annihilate the entire rebel force over six hours before vanishing once more.[5]

They were again absent from recorded history until three decades later when the chapter's 4th company was seen fighting alongside the Dark Angels at the Arrulas Intervention.[2]

The Chapter involvement in the Achilus Crusade has been focused on the Slinnar Drift. Their initial deployment, with the 3rd company and elements from the 1st and 10th, was in 801.M41. Their Strike Cruiser Heritor of Ages while en route to Shedu was ambushed by the Ork Kill Kroozer Growler, which eventually resulted in the abandonment of the Heritor. As Shedu is the only life-sustaining world in the Drift, it is unknown what happened to them.[2]

In M41, the Consecrators answered Supreme Grand Master Azrael's summons to the site of destroyed Caliban, where they joined the Dark Angels and Knights of the Crimson Order Chapters in battle with Chaos Space Marines led by Typhus.[3b] They were noted to have been reduced to almost half strength at the time.[3a]

During the War of Beasts. in M42, on the planet Vigilus, the 6th company arrived in the Oteck Hivesprawl without warning, before striking hard, then disappearing once again.[6][12]

In M42, the Consecrators were among half a dozen chapters of Unforgiven (numbering a force of 1000 Astartes total between all chapters) sent to the shrine world of Darkmor during a hunt for the Fallen. There they were ambushed by the forces of Chaos, the Unforgiven suffering the worst losses since the Forgotten Wars. Less than 100 of the total force sent survives, having discovered a hidden teleportation device while pursuing the Fallen known as Cypher. This event would be recorded as the Massacre at Darkmor.[7b]