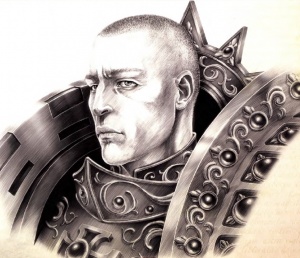 Constantin Valdor ('Emperor's Spear'), the First of the Ten Thousand[6c], was the Chief Custodian to the Emperor of Mankind as Captain-General of the Adeptus Custodes at the time of the Unification Wars, Great Crusade, and the Horus Heresy.[5]

The origins of Constantin Valdor are mysterious. According to Amar Astarte, his original parents were killed by the Emperor, who moved entire armies across continents to locate and retrieve him. Valdor himself knows very little of his past before becoming the Emperor's servant.[13] While commonly accepted as the first Custodes Valdor does not recall if he was truly the first Custodian, or simply the first successfully produced one.[10] He served during the Unification Wars at the Battle of Maulland Sen. A handful of years later, he assassinated Koja Zu, the Minister of the Anuatan Steppes[6a], and claimed her son, Ra Endymion[6d], for the Legio Custodes.[6b] During the Battle of Maulland Sen Valdor witnessed the savagery of the Thunder Warriors and became worried over their future.[13d]

By the end of the Unification Wars Valdor had emerged as part of the ruling "triumvirate" of Terra alongside the Emperor and Malcador. He had become suspicious of Grand Provost Marshal Uwoma Kandawire, dispatching Samonas to unravel her conspiracy before it could begin.[13c] However the conspirators still struck in the Palace Coup, during which Valdor was confronted by Kandawire, as well as Ushotan and his surviving Thunder Warriors. Valdor urged the conspirators to surrender, but when they refused he deployed the proto-Legiones Astartes in their first battle. During the battle the rebels were crushed and Valdor slew Ushotan, an act he took no gratification in as he had admired the General. Surprisingly, Valdor spared Kandawire and let her leave the Palace to retire in peace.[13a]

Later Valdor expressed his surprise when Malcador stated that the Primarchs were still alive and that the Emperor was attempting to find them. Valdor couldn't understand why the Arch-Enemy had decided to spare them, and believed that if they were alive then they would be corrupted. Valdor instead wished to raise armies of mortals to be led by his Custodians.[13b]

Prior to the Horus Heresy, Valdor had earned 1932 names.[3] By the 41st Millennium a book which apparently had his whole name written down took up an entire volume.[15]

Just prior to the open outbreak of the Horus Heresy, Valdor was charged by the Emperor to accompany Leman Russ of the Space Wolves in bringing Magnus the Red to account for breaking promises made during the Council of Nikaea at which the Emperor strictly forbade the use of sorcery and psychic powers.[2]

Valdor, with a contingent of elite Custodian Guard, fought alongside Russ and the Space Wolves on Prospero. He and his forces were responsible for killing at least three of the greatest psykers of the Thousand Sons and routing a force much more numerous than their own, however little else is known after this. Valdor eventually faced over thirty of the elite Khenetai "Blademasters", warriors who could predict an enemies' attacks through psychic precognition. The Captain-General slew every one of these deadly warriors, receiving only a single wound in the process. According to one account, he was also responsible for saving Bjorn when his arm was corrupted by the sorcerous powers of a Thousand Sons psyker. Valdor sliced Bjorn's arm off to prevent the corruption from overrunning his body. The other states that Bjorn's arm was cut off by a Skjald of the Space Wolves, Kasper Hawser.[2][4] 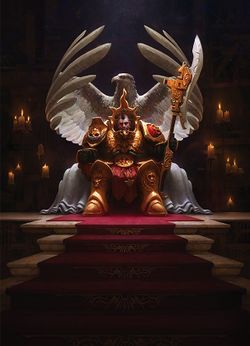 When Amon Tauromachian returned from his extended Blood Game, Valdor informed his fellow Custodian of how Horus Lupercal had declared rebellion against the Emperor. When Tauromachian asked how this could happen, Valdor, speaking as someone who knew the Warmaster, rejected theories that it was pride or resentment, instead voicing his belief that something had driven Horus and his closest advisers mad. Valdor then assigned Tauromachian with the task of investigating Pherom Sichar, Lord of Hy Brasil, for evidence of treason.[3]

After Horus declared his rebellion, Valdor then oversaw the mission and deployment of the first ever execution team. Invited by the Master of Assassins whose secret identity was Malcador The Sigillite who oversaw the council of Assassins. Each clade- Venenum, Eversor, Culexus, Vanus, Callidus, and led by Vindicare selected a single alpha-dan operative for the mission. The target was Horus Lupercal. Rogal Dorn learned of such events and challenged Valdor claiming that Horus being alive was a boon because he was predictable, and killing the head of the rebellion would not stop it, someone more predictable would simply take over. Valdor argued that the actions of the Officio Assassinorum were not necessarily cowardly, but expedient. Valdor says to Dorn that they all want the same thing; to preserve the Emperor. Dorn however claims that Valdor's role is to safeguard the life of the Emperor, whilst Dorn himself, and all the Astartes role is to safeguard the Imperium. The Assassin's mission uncovered valuable information, and encountered Erebus' own agent, daemonically enhanced. The mission to kill Horus is a failure as Horus is tipped off of the attempt on his life and sends a proxy who is killed in his place. Dorn and Valdor continue to argue, Dorn citing that to preserve the Imperium we must have a moral code, Valdor citing that to match Horus' evil we must not stop at underhanded tactics. The Emperor settles the argument with the final statement "No more shadows. No more veils". [1]

Later as the majority of the Custodian Guard was occupied by the War Within the Webway, Valdor assumed a vital position on the loyalist War Council alongside Malcador, Rogal Dorn, and Kane.[6c] He reappeared shortly before Leman Russ left Terra to confront Horus directly, returning the Spear of Russ to him. During their conservation, Valdor expressed disdain at the Space Wolves use of Rune Priests, considering them no different from normal Librarians which were now banned due to the Council of Nikaea.[9] Valdor next appeared as the Solar War began, meeting with Rogal Dorn alongside Sanguinius, Jaghatai Khan, Malcador, and Dorn's command staff.[11]

Valdor fought in defence of Mankind's homeworld during the Siege of Terra. During the Siege, he deployed Amon Tauromachian to investigate apparent Daemonic activity in the Imperial Palace. When Amon asked what should be done to Euphrati Keeler and her proto-Imperial Cultists, Valdor ordered that the remain unharmed as part of Malcador's plan to use them in the fight against Chaos.[12a] After the fall of the Lion's Gate Spaceport he helped lead the defense of the Colossi Gate alongside Jaghatai Khan and Raldoron, fighting against swathes of Daemons.[14] After the escape of Basilio Fo from Blackstone Prison Valdor saw the mad scientist a threat big enough to warrant his own personal attention, and he hunted the prisoner throughout the Palace.[19a] He eventually saved Fo from a roaming Night Lord and decided that the human's supposed anti-Astartes bio-weapon could be of service to the Emperor.[19b]

Later during the battle loyalist marines who witnessed the Captain-General in combat, saw him reave through traitor marines as easily as they would against ordinary humans and weaker xenos. After the Siege of Terra, Valdor met with the newly arrived Leman Russ. While Russ was distraught and pessimistic of what had befallen the Imperium and Emperor, Valdor expressed confidence that the Master of Mankind had foreseen all that had transpired and planned accordingly. Secretly however, Valdor is unsure if this is true.[10]

Sometime after the Heresy, around the same time as the disappearance of Leman Russ, Valdor also disappeared without a trace. During the dead of night, Valdor simply slipped out of the Imperial Palace, turning back once to look upon the Palace and whisper "Only in Death" (the first part of the Imperial quote Only in death does duty end) before vanishing.[10] His fate is unknown even by the Custodes themselves. He is one of three Captain-Generals to have gone missing without even the Adeptus Custodes being aware of the details.[8]

A book recovered and translated by Gideon Ravenor and Alizebeth Bequin identified the enigmatic King in Yellow as apparently being Constantin Valdor.[15]

Beyond his absolute loyalty to the Emperor, Constantin Valdor was known for his stoic and observant personality.[10] Despite the claims by outside observers he did not experience emotions such as pride or arrogance, or really any feeling at all besides his sense of duty to the Emperor. The Thunder Warrior Ushotan expressed pity for Valdor, stating that he had all the humanity sucked from him and had become numb. Valdor did not disagree with the sentiment.[13a] Nonetheless he seems capable of taking fondness to certain individuals, such as Uwoma Kandawire and Ushotan.[13b]

Valdor's battle prowess was legendary. His reaction time was to the point where it seemed as if he could see time itself come to a halt.[13a] A warrior of superlative skill, it was said that Valdor could match even a Primarch in single combat. Indeed, such was his might, that there were those, even in the Imperial Court, who called him a "Primarch" in all but name.[6e]

Valdor went into battle equipped with a expertly crafted Guardian Spear known as the Apollonian Spear and an ornate suit of Custodian Armour.[7] 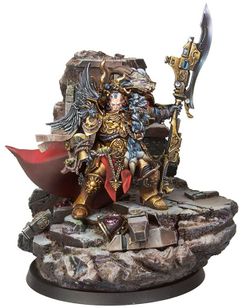