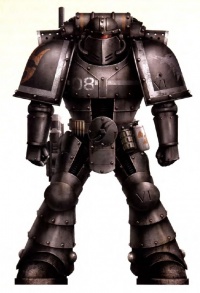 A Consul-Opsequiari was a type of Space Marine rank used by the Space Wolves during the Great Crusade and Horus Heresy. These officers oversaw the VI Legion's disciplinary corps, maintaining order in the ranks.

In the years prior to the finding of Leman Russ, the VIth Legion exhibited fierce aggression and little of the control they later possessed. The Molorian Revolt demonstrated a need for improved discipline. As a consequence, the Legion organized a large number of disciplinary troops. These disciplinary troops served to maintain order in the ranks and make sure that Space Wolves packs strictly adhered to orders. The Consul-Opsequiaris were chosen from the most stable veterans of the Space Wolves and were granted the power to execute Battle-Brothers with impunity if need be.[1]

Space Wolves Consul-Opsequiari's wore the Raptor Imperialis on their armor as symbols of their authority.[1]