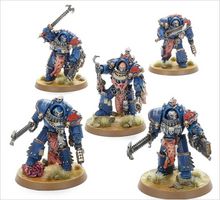 The Contekar Terminator squads were units within the Night Lords Legion.[1]

The Contekar acted as elite shock troops adept at sowing panic and dismay and their talents for steadfast ruthlessness in the prosecution of war was highly valued. Butchers and murderers of the highest order, they were called upon when the Night Lords wished to bring more than terror but utter and abject despair and destruction upon a foe. The Contekar would destroy not only enemy armies but also their infrastructure, agriculture, and culture[1]. In battle their squadrons were led by Contekar known as Dissidents.[2]

The Contekar were a hardy warrior class within the Night Lords Legion and was made up of recruits from Nostramo's ruling class. They were known for the contempt they held for Imperial citizenry and were obsessed with status. They kept to themselves and were aloof from even their own Legion, deigning only to fight for those leaders they deemed worthy of possessed of noble Nostraman blood. Only the Night Haunter and First Captain Sevatar could freely command the Contekar. Other officers would risk a mighty price for calling upon their services, as the Contekar ever sought to further improve their station and interpreted any sign of weakness as an invitation to kill a rival.[1]