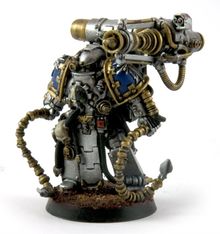 Space Marine Master of the Forge with conversion beamer

The conversion beamer fires a high intensity energy beam, which transforms matter into pure energy. A heavily armoured target or dense material will be rent apart as its matter explodes. The more dense the material of the target the more energy that is converted, making conversion beamers particularly good against heavily armoured troops, vehicles and buildings. The intensity of the beam increases as it extends further from the weapon, becoming increasingly dangerous, until it reaches the focal point where the beam is so intense that the energy has to be released in a violent explosion.[1][8]

Smaller versions were once known to be occasionally carried by Terminator Marines for cutting through bulkheads when exploring Space Hulks, but this practice is no longer prevalent[Needs Citation].

An unfortunate downside to conversion beamers is that they are incredibly large and heavy (as they require a number of massive capacitors that line the projection tube) and must remain absolutely motionless when operated, or the intensity of the beam will be negated, rendering the shot useless.[8] Because of this, conversion beamers are usually fitted to self-propelled, wheeled carriages or anti-gravity platforms (the operators will often remain at a safe distance using some form of remote control).[Needs Citation] Users of the smaller hand-held versions are forced to wear boots with special claws to provide more stable purchase. Another problem with the conversion beamer is the length of time they need build up the energy that is released in the beam. Although it is only a second or so, it is easily long enough for potential targets to have moved or escape the field of fire.[8]

A more powerful version of the "regular" beamer - is an ancient relic-weapon of incredible and poorly-understood power[6]. It is sometimes found on Contemptor Pattern Dreadnoughts[3], Decimator Daemon Engines[4] and Deimos pattern Predators Executioner.[5]

Among the largest known surviving examples of the rare and delicate conversion beam technology, Conversion Beam Cannons are mounted on Knight Asterius vehicles. They are rightly feared as siege weapons and fortress breakers. These gigantic weapons, when tied to the complex systems concealed within the Acastus Knight Asterius’ carapace, are focused on a target point while the beams are calibrated and aligned, causing a sub-atomic implosion that literally tears all matter in the target zone apart.[9]

Conversion Beamer used by the Leagues of Votann.[10]

Larger version of the SP Conversion Beamer used on vehicles of the Leagues of Votann, such as the Hekaton Land Fortress.[12] The weapon is a Brokhyr-enhanced STC-based design that the Imperium especially covets.[13]