Corax: Soulforge is a novella written by Gav Thorpe and part of the The Horus Heresy series. It was released in April 2013. The short story The Shadowmasters is also printed within the book's dust jacket.

In spite of the corruption of Corax's plans to rebuild his Legion after the Dropsite Massacre, the surviving Raven Guard remain defiant. Happening upon a stricken Word Bearers vessel far behind the front lines, they find evidence of a new alliance between the traitors and the forge world of Constanix II — with rumours of terrifying new war machines stalking battlefields across the sector, it is a threat too great to ignore. The primarch Corax must infiltrate the heart of the Mechanicum priesthood on Constanix if he is to win any allies for the war to come, though he will likely be forced to confront the truth of his own mysterious nature along the way...

The Mechanicum of Constanix II 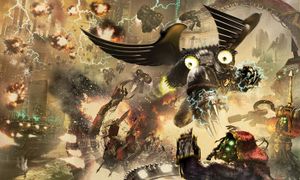