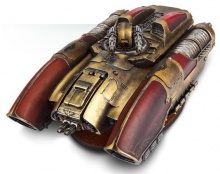 The Coronus Grav-Carrier is a type of Grav-Tank and armored personnel carrier used by the Custodian Guard during the Great Crusade and Horus Heresy.

A technologically advanced vehicle, it was only produced in limited numbers and replaced the Jocasta grav-carriers previously used by the Custodes during the Unification Wars.[2]

The Coronus Grav-carrier is perhaps one of the most recognized vehicles used exclusively by the Legio Custodes. This heavily protected transport skimmer provides them with a degree of speed and agility unmatched by the grinding armor of others who fight in the name of the Emperor, allowing the Legio Custodes to deploy rapidly into a range of terrain whilst reducing the risk of being pinned down by enemy forces.

Principally used as a transport, the strikingly-designed Legio Custodes Coronus Grav-carrier served as the technological basis for the Pallas and Caladius grav-craft. While its primary function is transporting a unit of warriors into battle, its armaments – hull-mounted Lastrum Bolt Cannon and turret-mounted Arachnus Blaze Cannon – ensure that it is more than capable of mounting appropriately aggressive defenses. [1]