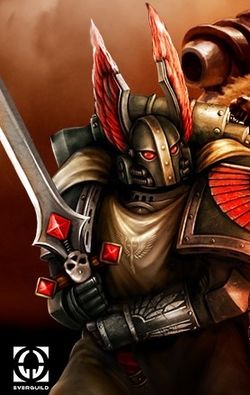 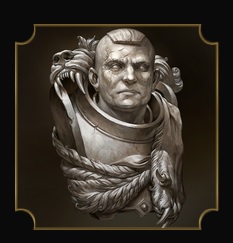 Corswain was the Captain-Paladin of the Dark Angels's 9th Order during the Great Crusade and Horus Heresy, later commanding half the Legion as The Lion's Seneschal.[3]

Corswain was born on Caliban but was not ingrained into The Order. He was uniquely placed to bridge the divisions within the First Legion during its formation into the Dark Angels under Lion El'Jonson's leadership. He was groomed to serve not any one Host or Order but to command the respect and knowledge of all.[8]

Corswain became the Paladin of the 9th Order under Master Alajos during the Great Crusade. The finest swordsman in the Legion, he was the bearer of the Mantle of the Champion and one of only two Dark Angels ever to best Alajos.[1] In time his reputation grew similar to the likes of Raldoron and Sigismund.[8]

He was among the forces of the 9th Order that stripped Luther of his ships after he disobeyed his orders to remain on Caliban in order to aid Horus at Zaramund in 970.M30.[3]

After the outbreak of the Horus Heresy, Corswain fought alongside his Primarch Lion El'Jonson against the Sons of Horus on Diamat[2] and the Night Lords in the Thramas Crusade. On Tsagualsa, Corswain and Alajos accompanied the Lion when he met with the Primarch of the Night Lords Konrad Curze and his own Honour Guard. After battle broke out between the two sides, Corswain and Alajos battled Sevatar and Shang. Corswain was unable to prevent Captain Alajos from being killed, but impaled Curze as he strangled the Lion - leaving the sword in the primarch's spine.[1]

After the Battle of Perditus, Corswain was made Seneschal to the Lion and given command of half of the remaining Legion to with hunt down and eliminate First Captain Calas Typhon and his Death Guard splinter fleet while the Lion traveled with the other half to Ultramar. Sustaining heavy casualties at the hands of the Death Guard, Corswain sent a small number of volunteers to Caliban with transports to bring reinforcement.[3] However these reinforcements never arrived, angering Corswain. He eventually rendevouzed with Luther and his secretly Fallen warriors at Zaramund, unaware that Luther had just secured the system for himself. Luther had fully committed himself to independence from the Imperium, and was secretly harboring the fleet of Death Guard which Corswain was pursuing. Luther deceived Corswain, stating that they had driven off the Death Guard. Corswain scolded Luther for violating the Lion's edict to not leave Caliban but otherwise fell for the ploy.[11b]

Corswain next appeared during the Siege of Terra, arriving at the edge of the Sol System to rendezvous with Admiral Niora Su-Kassen and the Phalanx and proclaimed his forces were ready to fight for the Emperor.[7] Hiding at the edges of the Sol System, Corswain convinced Su-Kassen to a plan to have him and his warriors land on Terra to take part in the battle.[12a] Using the Imperator Somnium, Corswain was able to break the traitor blockade and land on the Hollow Mountain.[12b] The Dark Angels found the complex occupied by the forces of Chaos, and he was nearly overcome by the Daemon Vassukella.[12c] Saved by Vassago, Corswain expressed his intent to reactivate the Astronomican.[12d]

Corswain survived the Heresy to return to Caliban. During the Destruction of Caliban, he was among the first to make planetfall and do battle with the Fallen.[4] During the battle, Corswain cornered and dueled the Lord Cypher.[11a]

Corswain is a legendary figure to the Dark Angels of the 41st Millennium. The sword he wielded during the fall of Caliban is known as the Blade of Corswain, presented as the bladesman's honour to the finest swordsman in the Ravenwing.[5] He also lends his name to the Lost Mace of Corswain, a relic power maul used by the Deathwing.[6]