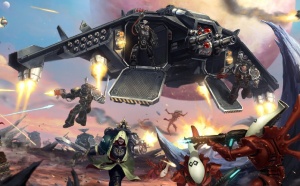 A Corvus Blackstar unloads its compliment of Space Marines

The Corvus Blackstar is a type of gunship used by the Deathwatch Space Marines.[1]

A sleek and deadly craft, it is designed to penetrate the outer defenses of alien hosts to strike directly at its heart. Though small enough to slip through sensor grids, its weapons systems are highly advanced, allowing the Blackstar to cause devastating impact for a craft its size. Primarily fulfilling the role of transport, its vectored engines are nimble enough to dart through winding terrain. Once in position it will switch from fighter craft to hovercraft, deploying the Deathwatch Space Marines held within. The pilot of each Blackstar is a veteran Techmarine who has earned the right to field it over long and arduous years of schooling. The pilot uses the same machine each time; so intense is this training that the Techmarines will link with the Machine Spirit of the aircraft.[1]

The Blackstar has advanced systems to ensure its survival. Its robust construction can shrug off even a direct hit from enemy anti-aircraft fire, and it is also equipped with Infernum Halo Launcher decoy flares and Interceptors. For armament, the Blackstar is most commonly armed with four Stormstrike Missiles and twin-linked Assault Cannons, though some are equipped with prow-mounted Lascannons in order to penetrate armored targets. Many of these craft also carry Blackstar Rocket Launcher arrays under each wing which can fire incendiary Dracos Air-to-Ground Missiles or air-to-air Corvid Rockets. It is also equipped with a Blackstar Cluster Launcher, auxiliary Grenade Launchers mounted in the rear to strafe smaller targets.[1]

Such is its potency that it is by far the most frequently used gunship for Kill-Teams.[1] 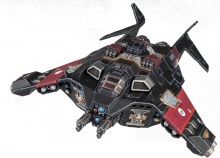