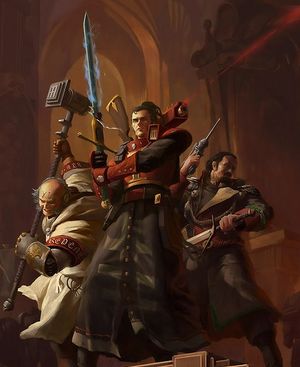 Covenant and his Retinue

Inquisitor Covenant is an Ordo Malleus Inquisitor and a psyker, who possesses limited psychic abilities. As part of those Inquisitors who have made it their duty to purge the Inquisition itself of perceived corruption, he is particularly focused in his Inquisitorial duties, especially on destroying the Daemonhosts created by the more Radical Inquisitors of the Ordo Malleus.[1]

Covenant was trained by Inquisitor Argento, but along with Inquisitor Idris were forced to slay their master after he attempted to create a Living Saint to hold the Emperor's spirit. Afterwards the duo were both named full Inquisitors of the Ordo Malleus.[3a] He later took part in the Siege of Malogrim Hive[2] and is responsible for the training of Daemonhuntress Ivixia Dannica.[1]

Recently he has begun hunting Radical Inquisitors within his order. This brought him into conflict with the heretical Inquisitor Goldoran Talicto.[3b] However upon being accused on Ero Talicto revealed his plans to murder the entire Inquisitorial conclave present there by overloading the Ero Reliquary Tower's Plasma Generator and assume command of the Caradryad Crusade. Revealing he also commanded a force of assassins known as The Renewed, fierce fighting broke out across Reliquary Tower.Idris died preventing the plasma reactor overloading but it was revealed that Talicto was in fact an impostor, the real Inquisitor had died years ago and had been replaced by an agent of The Triumvirate.[3c] Teaming up with Inquisitor Vult, Covenant chased The Triumvirate to a hidden asteroid base but were assailed by unleashed Daemons. Thanks to the sacrifice of Vult, Covenant and his retinue were able to escape The Archive before it was destroyed by the traitor Frigate Truth Eternal.[3d]

Covenant is equipped with a power falchion and Mind Impulse Interface-linked psycannon.[1] 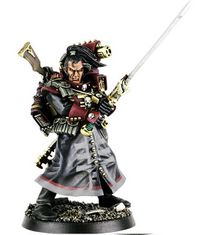