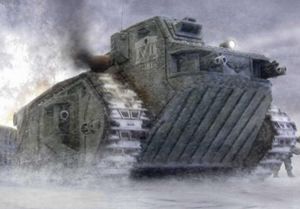 The Crassus is an immense heavy armoured transport utilized by the Imperial Guard.

The Crassus is named after one of Lord Solar Macharius' greatest generals, Borgen Crassus. The Crassus is equipped with a searchlight and smoke launchers, and armed with four Heavy Bolter sponsons, each which can be replaced with either Heavy Flamers, Autocannons, or Lascannons. The Crassus has a maximum carrying capacity of thirty infantry units, and/or two Cyclops Demolition Vehicles. The Crassus may also be upgraded with a Hunter-killer missile, Dozer Blade, or a pintle mounted Storm Bolter or Heavy Stubber.[1]

It is said that some factions in Divisio Militarus believe that the Crassus chassis was 'reclaimed' from the re-conquered Forge World of Zhao-Arkkad.[2]

The Crassus' drive system is considerably more powerful than other vehicles its size. This was designed to not only cope with its additional armour, but also to provide its driver with the speeder to deliver the vehicle's human cargo to its destination under heavy enemy fire, and then move to a safer position to await their extraction. As such, its weapons are primary used in a defensive role.[2]

The Crassus Armoured Transport is used widely by Imperial Guard and Adeptus Mechanicus forces along the southern and western Segmentum Tempestus, and recently production from Lucius in the last several centuries has allowed it to also come into service with units near the Eye of Terror where it develops an almost talismanic reputation due to its durability and power though it is born some disqueting of some within the Commissariat and Departamento Munitorum.[2]

Crassus armoured transports were used by the Imperial Guard during fighting on Betalis III. Capable of holding up to thirty-five soldiers or two Cyclops Demolition Vehicles, the Crassus played a crucial role in the Battle at Alnitac, enabling Colonel Empteda to destroy the important facility before it fell into Eldar hands.[2]