The Crimson Castellans are a Space Marine Chapter which turned partially renegade.[1a] 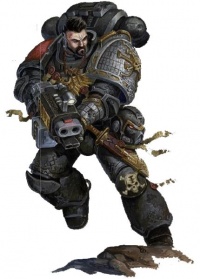 A Crimson Castellans of the Deathwatch

Since abandoning their Homeworld, Vorl Secundus[1b], the Crimson Castellans have become a Fleet Based Chapter.[4]

The loyal Crimson Castellans were involved in a war on Hive World Sephrax against a pirate warband fronted by their renegade brothers, when Hive Fleet Jormungandr descended upon the planet. Both sides, although there was never an official truce, wisely never sought to jeopardize their own survival by engaging two enemies at once. However, all they could do was slow the Hive Fleet down. Eventually, Sojai Antiro, the Crimson Castellan's Chapter Master, died in the bowels of Hoventa Hive spitting curses at Raveners who tore him limb from limb. The pirates' leader, the self-styled Arch-Commodore Bloodspite, displayed pragmatism too late and fled to his orbiting asteroid lair which was swallowed by a Hive Ship of enormous size.[1a]

They battled both Iyanden and Tyranids during campaigns against Hive Fleet Leviathan.[2]

Noted Elements of the Crimson Castellans