The Crimson Fists are a Space Marine Chapter. They are one of the successor Chapters created during the Second Founding, their progenitors being the Imperial Fists and their Primarch Rogal Dorn.[1]

After the Horus Heresy, it was decided (in the Codex Astartes written by the Ultramarines Primarch Roboute Guilliman) that no single man should ever wield the power of a whole legion of Space Marines alone, and that each legion was to be split up into thousand-man strong chapters. Rogal Dorn of the Imperial Fists legion long opposed this, but decided to yield rather than risk the fragile peace of the post-heresy Imperium. The Imperial Fists legion was divided into four chapters: The marines most devoted to their Primarch were to remain Imperial Fists, the most zealous started the never-ending crusade of the Black Templars and the younger and more levelheaded marines formed the Crimson Fists. The first Chapter Master of the Crimson Fists was Alexis Polux, a hero of the Heresy. The chapter's name derives from the ceremony conducted at the initiation of new chapter masters in the Imperial Fist legion. The Chapter Master and the Primarch would both cut their palm and share blood in a warrior handshake; strengthening the marine with the blood of the Primarch and forming a symbolic bond between them.[1]

The Crimson Fists spent their first nine millennia as a space-faring Crusade Chapter, based aboard the fortress-monastery Rutilus Tyrannus[6], much like the Black Templars. Their first victory was against a large host of Exodite Eldar on Urolak Prime, followed by the cleansing of HR8518; the home system of an alien race known as the Scythians.[1] Their most legendary campaign was the Crusade of Righteous Liberation - the retaking of planets lost after the Age of Apostasy. The largest Crimson Fist operation in more recent times was the Voltigern Crusade in late M40, where several Ork empires in the Loki Sector were attacked and destabilized, later to collapse in civil war. For this, the Crimson Fists were granted fiefdom over Rynn's World, a prosperous agri-world.[1] The ruins of the Rutilus Tyrannus were moved to Rynn's World and the Fists built their new Fortress-Monastery around it.[22a] Their homeworld was invaded by Orks in mid-M41. The Crimson Fists, led by Captain Drakken of the 3rd company had earlier tried to sabotage an Ork Waaagh building on the nearby world Badlanding, but failed. The Orks rallied under Warlord Snagrod — the Arch-arsonist of Charadon — and invaded in response, despite the almost suicidal nature of invading a Space Marine homeworld. The odds shifted in the Orks' favour when the Crimson Fists fortress-monastery was destroyed by a stray missile from its own defence system. Of more than six hundred space marines stationed there, only sixteen (among them Chapter Master Pedro Kantor and Brother-Captain Cortez) escaped the blast.[10] Circumstantial evidence, and coincidences have led some to believe the Officio Assassinorum may have had a hand in the strange destruction of the fortress-monastery, but no concrete evidence has ever come to light.[4]

The last two-hundred and eighteen surviving Space Marines on Rynn's World consolidated their defences at the planet's capitol, New Rynn City, and managed to stave off the invasion after a furious, 18-month siege behind the city's walls. The siege was broken by a relief force of more than 2200 ships and elements of 6 Space Marine Chapters (amongst them the Ravenwing of the Dark Angels[3]), the Titan Legions, and the Imperial Navy. [10] With no more than a hundred surviving marines the Chapter came close to being disbanded due to irrecoverable battle losses, but have since managed to recover.[1] The chapter is back to half its original strength as of late M41.[7] 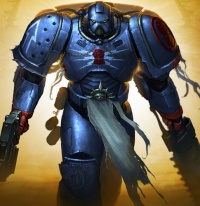 During the Imperial attempts to reclaim the planet of Entymion IV, the Crimson Fists answered a request for reinforcements. During the first assault, the Crimson Fists' commander, Captain Reinez, discovered the presence of the Soul Drinkers on the planet after suffering an attack by Tellos. Additional companies arrived led by Chaplain Inhuaca, but their campaign ended in failure as Entymion IV was lost and the Soul Drinkers successfully accomplished their goals and escaped off world.[7]

With the formation of the Great Rift the Crimson Fists homeworld of Rynn's World was again invaded, this time by Daemons. Ultimately Roboute Guilliman's Indomitus Crusade arrived to break the Dameonic siege. With them came new Primaris Space Marine recruits, allowing the Fists to rebuild their former strength and embark on new campaigns against the enemies of mankind.[15a] 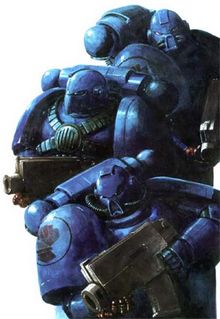 The Crimson Fists embrace the Codex Astartes readily, and are probably the most traditional among the sons of Rogal Dorn, and receive training of all aspects of combat as written by Roboute Guilliman. There are a few minor deviances; such as the first company being known as the Crusade Company, a tradition started after the Crusade of Righteous Liberation left the Crimson Fists with no more than 128 survivors. The 1st company has been kept at 128 marines since, with the master of the Crusade Company always being the Chapter Master as well. It is considered a bad omen to march to battle with less than a full veteran company.[1]

The Crimson Fists have always had close ties with the Imperium and the Inquisition. They have contributed many warriors to the kill-teams of the Ordo Xenos, being renowned Ork fighters. They have also, at the order of Terra and the Inquisition, destroyed two chapters of brother Space Marines; the insane Sons of Gideon and the mind-wiped Marines Vigilant. This has earned them a reputation as lap dogs of the Inquisition among certain chapters[1]

The Chapter's main colour is deep blue with white or silver details. When an initiate joins the ranks of the Chapter his left glove is painted red; when he becomes a member of the Crusade company his right glove is also painted red. Scouts are often portrayed with red gloves but blue hand guards. Their Chapter symbol is almost an exact copy of that of the Imperial Fists but uses different colours, namely dark blue and crimson red.[1]

As of the beginning of the Indomitus Crusade M42:[22]

Though the Crimson Fists are a based on Rynn's World, they usually recruit from the nearby Feral World of Blackwater. They have also found Rynn's World unsuitable for training, and thus use the Loki Sector for such activities. Rynn's World largely occupies a ceremonial and aspirational role.[22a]

The Crimson Fists fleet was largfely destroyed during the fall of Rynn's World. However recently Chapter Master Pedro Kantor made a diplomatic request for warships to Battlefleet Tempestus, at their Ramilies Star Fort Goliath Vigilant. An agreement was then made, which saw the Battlefleet make several squadrons of escorts, a trio of cruisers and the Emperor Class Battleship Throne's Fury available to the Chapter, in return for a permanent garrison of Crimson Fists aboard the Goliath Vigilant. Since then Battlegroup Vengeance has borne out Knator's strategic genius in their every action, from the Kielden Reach to the second cleansing of Badlanding.[33]