Crimson Hunter are an extremely rare discipline of Eldar Aspect Warrior. The Crimson Hunters follow Khaine in his aspect of airborne pursuit and superiority. They pilot Nightshade Interceptor aircraft, high-speed fighters designed to clear the skies of enemy aircraft before providing air support.[1]

Crimson Hunters are trained to become exceptional pilots, endlessly practicing all sorts of maneuvers as well as marksmanship. The Crimson Hunter's Nightshades are armed with two Bright Lances and a Pulse Laser.[2] The Crimson Hunters are few in number, though their Shrines are becoming more widespread. These temples of Khaine are unlike any other for they are tunnel-like collections of transparent atriums that float around the periphery of their Craftworlds, allowing the Crimson Hunters and their recruits to freely train in their aircraft.[1]

Crimson Hunters are known to give special veneration to the Eldar God Kurnous, often calling themselves the Hawks of Kurnous.[3]

A Crimson Hunter shrine is led by an Exarch. They are the most accomplished of all Eldar pilots who have traveled so far down the Path of the Warrior that they can no longer turn from that path to follow another. Crimson Hunter Exarchs often have different weapons on their planes such as substituting the plane's Bright Lances for Star Cannons.[2] 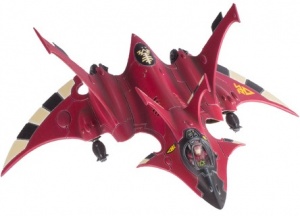 Crimson Hunter in a Nightshade Interceptor