Symbol of the Crimson Paladins 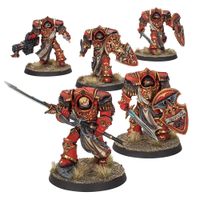 The Crimson Paladins, also known as the Keruvim or the Storm Wind, were the Terminator elite of the Blood Angels during the Great Crusade and Horus Heresy.

Belonging to the First Innermost "Sphere" of the Blood Angels Legion alongside the likes of the Sanguinary Guard, they served as the guardians of their Primarch Sanguinius' sanctums. At Sanguinius' order, they also took to the field as instruments of his determination and the shield of his will.[2b] Like other warriors of the First Sphere, they have forsaken their name and identity and assume a role that forsakes all sense of their previous selves.[2c]

The Crimson Paladins served as the grim counterpart to the Sanguinary Guard. When these warriors took the field, they acted as a bulwark against the foe and the shield for the sons of Sanguinius. They were superbly disciplined, acting as a single unbreakable bastion of blades and shields. By their sacrifice and indomitable resolve, the Blood Angels were able to vent their noble fury on the enemy. It is commonly said that no Paladin has ever taken a step backwards during combat.[2c]