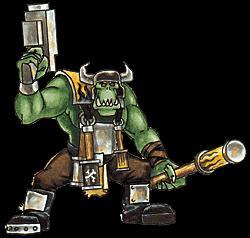 The Crooked Moon are an Ork tribe, and part of the forces of the Ork Warlord Ghazghkull Mag Uruk Thraka during the Third War for Armageddon. The tribe is currently embroiled in the fighting in Armageddon Secundus, around the Helsreach peninsula and the "Three-Pig" volcanoes. Due to the intense fighting, the tribe has suffered extreme casualties, with a third of its warriors dead. Despite its losses, the tribe can still muster some twenty warbands, and due to the losses they have suffered, the surviving Crooked Moon Orks are exceedingly well-equipped with stikkbombz, armour and weapons.

The Crooked Moon has obvious affiliations with the Bad Moon clan, and has been coordinating their attacks upon Imperial troops with the warbands of Warlord Morbad, whose extensive use of heavy artillery as earned him the nickname "More-bang" among the Imperial Guard.

Their Tribal colours are yellow with black flame motifs, and their Tribal glyph is a black quarter-moon.