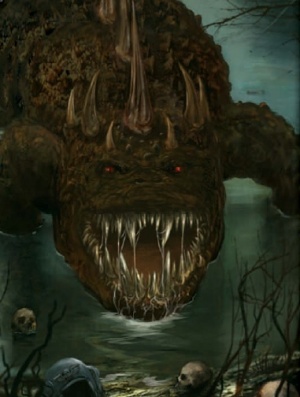 A Crotalid emerging from water.[1]

Crotalids are large, semi-aquatic carnivores that prefer tropical and sub-tropical rivers. They have been found all over the galaxy but the densest concentrations of sightings are clustered around the Death world of Lost Hope.[1]

Crotalid populations are actively hunted or even farmed on certain worlds, their meat is tough and unappetizing but their hides and teeth have some value. Hunting Crotalids for sport has some notoriety among more gauche, high society types, but it is more commonly the preserve of desperate men. Bait and traps are the clever ways to kill a Crotalid, preferably by getting it out of the water first.[1]

The beasts have long scaly bodies carried on stubby, powerful legs capable of driving them forward with surprising bursts of speed over short distances. A long, finned tail drags behind the creature on land, but in water it serves as a powerful propeller.[1]

The Crotalid’s head is dominated by its ferocious jaws filled with serrated rows of triangular teeth. These teeth never stop growing throughout a Crotalid’s life and Crotalid feeding grounds can be easily identified by the gnawed rocks and tree trunks found in the vicinity. Despite this, instances have been reported of dead Crotalids that were killed by their teeth growing so long that they finally pierced the creatures’ own tiny brains.[1]

Crotalids are protected by thick scales and a rudimentary nervous system that makes them extremely difficult to kill outright. Once injured or exposed to the scent of blood, Crotalids enter a kind of feeding frenzy which overrides any kind of pain or fear response, sending them into a berserk attack of thrashing limbs and snapping jaws.[1]

Crotalids are primarily ambush predators, feeding on fish, other aquatic animals and wildlife drinking at the water’s edge. They favour attacking from a submerged location and clamping their formidable jaws onto a victim before they have a chance to react. In some cases they are known to pursue prey a short distance out of the water, dragging it back to their aquatic home at the first opportunity.[1]

Crotalids are opportunists too and will quickly investigate any disturbances in the water, especially kills by other Crotalids, in hopes of snatching a mouthful or two for themselves in the resulting frenzy.[1]

A full-grown Crotalid can easily overwhelm a man, and give a Space Marine a difficult fight. Unfortunately Crotalids often appear in large numbers, quickly making their way to the top of the food chain and completely dominating the area they inhabit. As such, any encounter with one Crotalid means that several more will soon arrive, and in a heavily infested area, dozens can appear in moments.[1]

Crotalids in captivity have lived over seventy years, but Magos Biologis Xenologists have been unable to determine the life span of Crotalids in the wild with any precision. This is due to their unique and curious migratory habits. In fact, as a rapidly expanding population of Crotalids comes to dominate a region, their prey is completely exhausted in the course of a few decades. The Crotalid population must now migrate to a new location or face extinction, and the creatures instinctually gather in response to their growing hunger. At some undetermined point, the unconscious desires of the Crotalids enable them to move on, not by walking or swimming but by passing through the Immaterium itself. How Crotalids perform this feat is still unknown, autopsies have revealed no organ or abnormality that might give the beasts the ability to pass through the Warp. Certainly no conscious manipulation of the process seems available to the Crotalids themselves, as they can appear on worlds quite unsuited for them including desert planets and even airless worlds. Nonetheless, migratory packs of Crotalids can appear on worlds up to ten light years from their origin point and have been highly successful in establishing themselves in new environments through this apparently hit-and-miss process.[1]

Tracking migratory packs has proved impossible, as has keeping more than three Crotalids together in captivity. However it appears that once a population migrates it will not do so again for several decades, for the impetus seems to be driven by population pressure. Although observation of this phenomena is limited to finding evidence of failed migrations, Crotalids appearing on a world poorly suited to them do not seem able to move on to greener pastures using this remarkable trait. For some, this reinforces the prevalent theories that the Crotalids’ ability is not consciously used but an instinctual response to environmental pressures.[1]

A typical migratory pack comprises anywhere up to a hundred or more fully-grown Crotalids and can cause considerable damage. When they first arrive in a new hunting ground, Crotalids are extremely aggressive and will attack anything in sight to establish their dominance.[1] 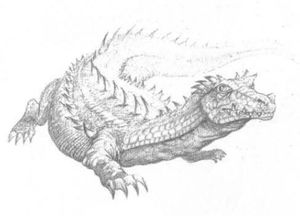