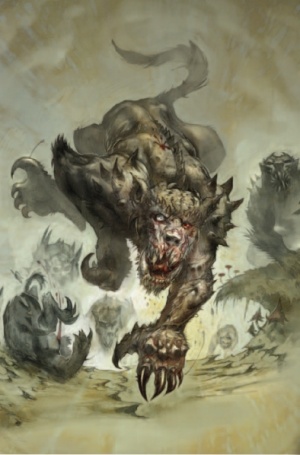 The war beasts known as Cruorians are established on several worlds in the Calixis Sector. Their name comes from Magos Biologis Harven Cruor, who first discovered the war beasts within xenos ruins in the Bloodfall system. Due to their particularly ferocious nature, the question has arisen of how they have managed to appear on such widely separate worlds in the sector. Rumours abound, ranging from the almost logical (e.g., the war beasts are being used to soften up different worlds for an invasion) to the outright inconceivable (e.g., Cruorians can pass through the Warp unaided). Of growing concern are whispered accounts of Cruorian war beasts being seen in the company of elements of the Ordo Xenos.[1]

Cruorian war beasts are generally massive animals standing on four long legs, each ending in thick claws. They have fur that ranges between dark green and blood-red and short spikes protecting the head, neck, and spine. The forefeet have opposable thumbs, and it is possible the Cruorians are slightly more intelligent than most think: they have been witnessed using crude melee weapons, for example.[1]

They seem to revel in battle, showing no fear of any threat. Gathering in large packs, Cruorian war beasts tend to open their hunts with a chorus of nerve–wracking howls. Once engaged, they are utterly merciless, and can go as far as to eat the slain in the middle of the fighting. Armoured vehicles are no guarantee of protection from a Cruorian war beast charge. They are burly enough to upset smaller vehicles simply by crashing into them and have been known to work together into order to tip over larger troop carriers and similar sized vehicles.[1]