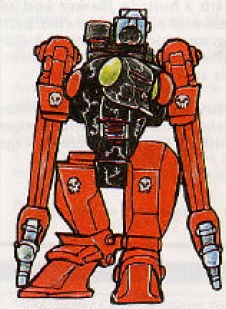 Crusader Class Robots were a type of war robot deployed by the Legio Cybernetica.[1]

A light and agile Robot, the lightly-armoured Crusader is designed for quick, debilitating strikes. Specialized in anti-personnel combat, it is generally not fielded when heavy resistance or armour is expected, though it is a favorite of the Inquisition for hunting down heretics. The Crusader is armed with a pair of power swords and a lascannon, though its ranged weapon can be replaced with a heavy bolter or melta gun.[1]

The Vorax Class Hunter-Killer robot was derived from this ancient design.[2]